Handshake Line: Yes this is a thumbtack on my palm

This series would have been better with the Kings wearing purple and gold and the Ducks wearing teal and eggplant. What could have been.

Share All sharing options for: Handshake Line: Yes this is a thumbtack on my palm

Anze Kopitar is my favorite to win playoff MVP. Against the Anaheim Ducks, he started off playing directly against Ryan Getzlaf and largely won that battle. The rest of the series was both coaches dancing around that matchup, with only Jarret Stoll having consistent success against the top Ducks centerman. But here's the thing: in addition to being at times used to keep Getzlaf in check, Kopitar had so many points in the series. He is really good at hockey. He has a raccoon mask too.  [Ed. Note:  He's no J.J Daigneault, but yeah raccoon mask. -CK]

Drew Doughty is, in my esteem (which is clearly the best, just because), the best overall defenseman in the NHL. He played an important role in the Kings defeat of the Ducks. Something to the tune of like 25-plus minutes per game, which is a lot. He played tough minutes against the better Ducks players, and he usually played with anchor defensemen unless paired with Jake Muzzin. He was very polite to Teemu Selanne in the real handshake line, so I'd buy him a milkshake sometime.

Marian Gaborik is showing extraordinarily well for himself in a Kings uniform. When the Kings won in 2012, Jeff Carter came in and played a similar scoring role. This year's variation is Gaborik, and he's brought a scoring threat to Kopitar's wing that has made the latter even better. Word around town is that Marian has played his way into a contract extension the Kings plan to announce after the playoffs end. This is bad news for our favorite teams, by and large. (Although conversely I suppose this gives our teams more chances to hit him, which will hurt his feelings.)

Alec Martinez is a pretty underrated defenseman but my buddy over at Battle of California loves to write fan fiction about him starring in buddy cop films. So I knew he was a special player or, at least, a player who develops a special following of loons and insane people. He scored a couple times and also saved some goals for Jonathan Quick early in the series. What a jerk, obviously.

Dwight King will always get recognition from me because otherwise I'm afraid he will try to skin me alive, wear my skin, and roast my liver over an open flame. I mean, seriously. 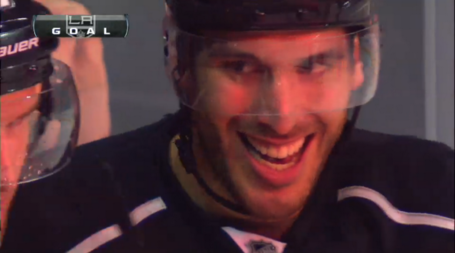 That is not the smile of a man you leave out of a handshake line.

Handshake Line, Reluctantly Bowing Down to the Kings of California