Playoffmetrics, Round Two: Game One

Don't worry, the Kid is here to tell you about life!

Share All sharing options for: Playoffmetrics, Round Two: Game One

ROUND TWO, GAME ONE

Although the final result was disappointing, the first game in the first ever playoff series between the Anaheim Ducks and the Los Angeles Kings was fantastic. It was a more even contest than many expected, given the usual disparity between the clubs' respective possession numbers. The Kings had more shot attempts in total, but both teams were even in blocking attempts from getting through. The Ducks, however, had the slight edge in total shots on net at 5v5, meaning fewer of the team's attempts missed.

Here are the shot attempts minus blocks in all game states, courtesy of extraskater: 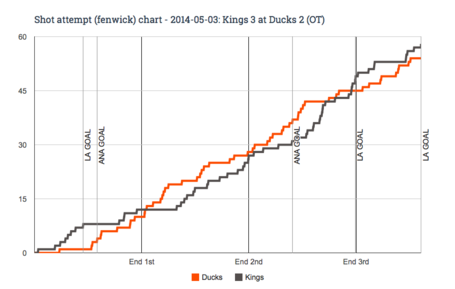 Here are the even strength shot attempts minus blocked shots: 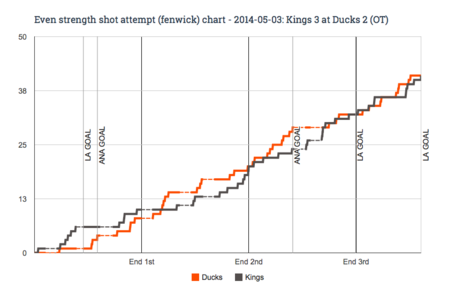 The game in brief was like this: the Kings opened up with much better play, pushing the Ducks back and getting several looks in the offensive zone. The Ducks eventually countered and carried play until near the end of the second, when the Kings had a strong push after sitting back. The third was fairly even, with a slight edge toward the Kings, who carried the push made at the end of the third into the opening moments of overtime. The Ducks had the better chances in the overtime, but the Kings had more of them, and eventually a very good play ended this one in favor of Los Angeles.

Nick Bonino with Emerson Etem and Devante Smith-Pelly was far and away the Ducks best forward grouping. They were effectively the third line in total ice time at even strength. The next best line was Ryan Getzlaf with Corey Perry and Matt Beleskey, which shouldn't surprise too many. If the Getzlaf-Perry twosome end up with the best play in any game this series, it will be one the Ducks will win. The Kings hope to shut them down throughout.

The fourth line of Mathieu Perreault with Patrick Maroon and Teemu Selanne was the next best grouping. Bringing up the rear in terms of driving play was Saku Koivu with Jakob Silfverberg and Andrew Cogliano, which also shouldn't surprise anyone. Boudreau has been using Koivu as a second checking line throughout the year to mixed-to-negative results (in terms of puck possession), which is a dangerous gamble.

There's a conservative aspect to Boudreau's approach that I have been surprised by this season. The recent trend in hockey has been to roll forward lines to drive play forward and allow defensive pairings to match-up against opposing forwards. Teams that do use checking forward lines tend to give up possession as a trade for "responsible DZ play." I'm not willing to say this is the case with everyone, but in watching the Ducks this is absolutely the gamble Boudreau allows. Koivu isn't much of a scoring threat as a second line center, but he is very responsible defensively.

With the Ducks facing teams that have more or less abandoned pure checking lines (Sutter seems to mix his checking forwards into his other lines, judging by his usage of guys like Jarret Stoll), it feels like Boudreau's plan is more risky than not. Accepting play into the DZ, no matter how responsible, means the puck is always closer to the Ducks net. This defense isn't built to be constantly playing in the DZ.

What this also does is lessen the ice time of secondary scoring players that the Ducks will need in order to beat the Kings, who will lock in on Getzlaf and Perry until otherwise threatened. There's no reason Perreault's line should be getting fourth line duties with the last change. While I applaud Boudreau for throwing out Bonino's line more frequently based on play, since they were pencilled in as the fourth to start, it should have cut into the Koivu line's ice time and not the Perreault line. They were consistently the best line against Dallas before Perreault's injury. (There is the idea that Boudreau is keeping Perreault's ice time low specifically, given the possibility of him playing on an ache.)

Defensively, Cam Fowler and Ben Lovejoy ended up being the best pairing once again. Once more, they looked like they were getting creamed in terms of possession through the first but ended the game even. Given their role, that is actually very positive. Francois Beauchemin and Bryan Allen were both negative players, while Hampus Lindholm (unsurprisingly) and Mark Fistric (limited ice time) were both positive players.

Given Boudreau's defensive deployment, the team is one more solid pairing away from being largely "good." Fowler is so good that he carries Lovejoy every game. It works, so it isn't worth messing with too much unless something better comes along. The problem starts on the second pair, as Beauchemin is just not as good as he once was. Lindholm is doing a fabulous job at a very young age, but he tends to carry Beauchemin more than the other way, which concerns me. (At this point, I'd prefer to have Frankie playing third pair minutes with Allen while Luca Sbisa draws in with Lindholm. It's worth a shot, in my mind, although I think Beauch and Sbisa play different sides.)

Allen had a very rough night, which tends to happen whenever his ice time climbs. Boudreau really likes his size against a Kings team the equals the Ducks overall, but I hope he dials down the big man as the series goes on. Fistric seems a more capable big man in terms of his stick not exploding every time the puck touches it, but he hasn't earned Boudreau's trust enough to supplant Allen's ability to block shots on the PK.

Jonas Hiller had a sensational game. He tracked the puck well, he played big, he limited his rebounds to the best of his ability, and overall I thought he was the more consistent goaltender. Jonathan Quick had to make a few 10-bell saves in this one, so the positives to his game are more obvious. But Hiller was more steady throughout. If not for an Allen gaff in the closing 10 seconds and an incredible play by Anze Kopitar, Drew Doughty, and Marian Gaborik in overtime, Hiller comes away from this the winner. (And on the OT goal, Hiller still almost got a piece of it, which is absurd.) Boudreau should go back to Hiller in game two, without reservation.

For game two, I'd like Boudreau to force Sutter to match his lines a bit more. Ice the same forward lineup. Don't panic and sit a Silfverberg or Smith-Pelly for Daniel Winnik. While Kyle Palmieri is certainly an acceptable trade for Etem at this point, I don't think the latter has earned his way off the ice yet. (Certainly a case could be made for either in that instance, but Palmieri seems to have earned the Selanne sheltering treatment from Boudreau, which speaks to some trust.)

Unless Perreault is being sheltered due to injury, I'd like he and Maroon to see the ice more. If Bonino and the kids can play another game like game one, they should likewise get on the ice more. There's no reason Boudreau can't deploy Koivu similarly but with fewer minutes, trusting his young players a little more. I suspect those players will be the key to moving on in the playoffs.

On defense, I wouldn't be opposed to Sbisa drawing back into the lineup. He hasn't been bad in his appearances down the stretch. (If the Ducks can convert him to the other side at some point, he could end up being a reliable third pair guy despite his cost.) Otherwise, if the blue line is pencilled in the same in game two, I'm fine with it as long as Allen's minutes are kept in check. He can be effective in very limited capacity, and his role in game one was too much.