Share All sharing options for: Worst Possible Start Leads to 3-1 Loss in Game 2

First Period Recap: Remember when Marian Gaborik crushed all of our hopes and dreams with seven seconds remaining in Game 1.  Of course you do.  He did it again 34 seconds into Game 2.  The play started deep in the LA zone, and with two quick transition passes it was on Gaborik's stick at the blue line, with speed and separation from Ben Lovejoy.  Gaborik went in alone on Jonas Hiller and roofed it over his glove.

If there were any Ducks fans still with a shred of optimism about this game it was just about killed on the next shift when Hiller was forced to make a couple good saves on another rush up ice by the Kings.  Tanner Pearson picked off a Ducks pass in the LA zone and skated the length of the ice, tried to go five hole on Hiller, was shut down and Tyler Toffoli's rebound bid was snatched out of the air in typical flashy Jonas Hiller fashion.

After that, the Ducks did settle down and responded to the Kings super fast start.  Nick Bonino had a great opportunity as the Ducks began to wake up and push the pace, when a low to high pass found him wide open in the slot, but he fanned on the shot and it went for naught.  Rhymes make it sound better, don't they?

Devante Smith-Pelly was also robbed by a Hasek-esque sprawling, two pad stack flail move from Jonathan Quick after pouncing on an active bounce from the end boards that put him all alone at the top of the crease too.

With a couple of good forechecking shifts, the Ducks were able to stir up some nastiness as Matt Greene and Bryan Allen went off for matching roughing minors creating a 4-on-4 situation.  More pressure from the Ducks drew a hooking call against Drew Doughty. The 4-on-3 PP looked good with Patrick Maroon getting stuffed on a chance at the side of the net by Quick's pad.  Maroon later converted, when going to the net and trying to shovel a backhand pass across the crease to Corey Perry it bounced off the leg of Jake Muzzin and into the net to tie the game at one.

The Kings regained the lead right away however, when Jeff Carter knocked Saku Koivu into Francois Beauchemin behind the Ducks net causing the entire defense to scramble and eventually Alec Martinez' point shot to deflect in off of of Jacob Silfverberg's rear end.  Atl that was missing was Yakiey Sax.

Second Period Recap: There were a lot of penalties in this period.  That's about it, but I'll go into a little more detail.

Quick got a roughing minor for taking liberties with Perry after he had "accidentally" fallen into the Kings' crease.  That power play was cut short by a make up call when Maroon was sent off for "slashing" Quick's hand as he was covering the puck.  Please recall the Women's Olympic Gold medal game for reference as to how ridiculous this call was.

Shortly after those penalties expired Jarret Stoll tripped Perry as he was about to head to the net with the puck.  Good veteran move by Stoll on that one to prevent Perry from having a clear lane to Quick with the puck.  Also this was one of those horrendously, disgustingly, terribly, horrifically awful power plays by the Ducks.  Well killed by the Kings, to stand up at the blueline and refuse to let them into the zone, but just a complete lack of any kind of creativity or offense from the Ducks with the extra man.

At this point, the Kings were playing so defensively that if they could get another goal on the counter attack the game would be effectively over and done with.  Because of that a 3-on-2 rush that the Kings had where Cam Fowler got turned inside out but made a miraculous, spinning recovery was a small but impressive victory for the Ducks who maintained a steady, yet not very dangerous possession lead.

For long segments of the second period it seemed like the puck was just being rimmed around the boards again and again and again with nobody from either team close enough to reach it.  Once in a while the puck would get in front to Quick and he would cover it without being bothered.  Incredibly boring.

Toward the end of the period, Doughty took a slash in the leg and limped off of the ice, but only missed one shift.  Part of the Ducks' game plan was clearly to target Doughty with as much physicality as possible.  It didn't work out so great, especially when Matt Beleskey went off for "tripping" (actually kneeing, or possibly attempted kneeing) Doughty with only a few seconds left in the period.

Third Period Recap: The Ducks had by far the best chances of the third period while shorthanded from the carry over Beleskey penalty, but could not convert.

The entire third period was a gamble for the Ducks.  As the Kings sat back into a rigid neutral zone trap, the Ducks routinely left a cherry picking forward at the LA blueline whenever the puck was sent back into their zone.

At this point Andrew Cogliano woke up and was able to use his speed to get behind the Kings defense a couple of times, but to no avail.

For some reason the Daryl Sutter was content to let his team sit back and let the Ducks come at them for the entire third period, rather than their normal method of playing keep away to kill the clock on a lead in the third period.  There was a push from the Ducks and there were rebounds to be had, but due to good control by Quick and good positioning by the collapsing defense never fell to a Duck's stick

Boudreau pulled Hiller with about 1:30 left but Ryan Getzlaf bobbled the puck to Justin Williams at the blueline and he got it to Dwight King at center ice for the empty netter, the 3-1 win and 2-0 series lead to the Kings.

The Good: The Ducks won the possession?!  AGAINST THE KINGS!? That's pretty impressive, but the Kings didn't really seem to be out to play their normal stifling possession game.  Especially in the third period it was a hard 1-2-2, neutral zone trap all the way, just sucking all of the life out of the game.  But if you're looking for a useless moral victory here's a chart. 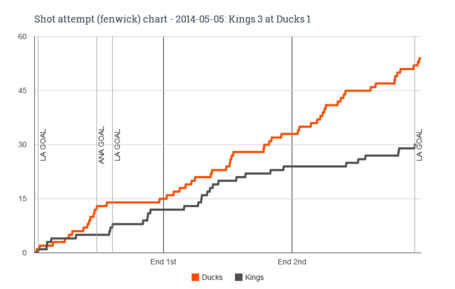 The Bad: Despite having more of the puck and getting it toward Quick the Ducks simply never looked dangerous.  There were some rebounds, there were even Anaheim players around the rebounds but the Kings  still managed to keep the Ducks' second chance opportunities to a minimum.

The Ugly: One shot, One Goal, 34 seconds, Marian Gaborik.  Unacceptable start to the game.  You can't win a game that you are trailing for 56:59.

3rd Icehole: Bryan Allen.  He didn't really do anything that egregious, but I'm still just annoyed that he was in the lineup after blowing Game 1 like a ..... well let's just leave that one to your imagination.

2nd Icehole: Keystone Cops Defending in the first period.  The Ducks were just not up to start this game. Just sloppy all around, especially in the passing.  Of course the Gaborik goal was bad, and the chance on the next shift spelled almost certain doom, but it was most evident in the Kings' second goal where Beauch and Koivu collided into each other behind the net and the puck went in off of Silfverberg's ass.  A comedy of errors if I've ever seen one.

1st Icehole: Marian Gaborik.  Some blame can be handed over to Ben Lovejoy, but he got beat by a better faster player who made a nice move.  Apparently Gaborik is making up for all the goals he didn't score in 2003 by stacking them all up in a 13 minute span.