The Ducks can still make this a series, but don't get too high on the game two numbers, ok?

Share All sharing options for: Playoffmetrics, Round Two: Game Two

The Anaheim Ducks are down two games to the Los Angeles Kings in the first to four and no longer have home ice. Of course fans are disappointed the morning after game two. But again in game two, like game one, the Ducks played a good game of hockey, and there should be no shame in that.

After game one I tried to mention each player. I'll highlight in broader strokes today. For those of you who have read this series (Pizzametrics before it was Playoffmetrics) all season, you know I hide the "advanced stats" into my discussion of systems, styles, etc. Game two is the perfect example of all of it. You should all go back and read my brilliant series of delicious hockey analysis if you haven't been doing so. Or have forgotten things. Or are really bored. Or like pizza.

Here are all the shot attempts (no blocked shots) from game two, courtesy of extraskater: 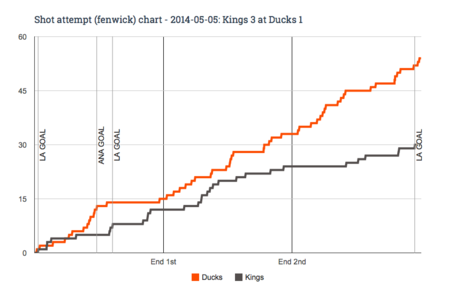 Here are the even strength shot attempts (no blocked shots): 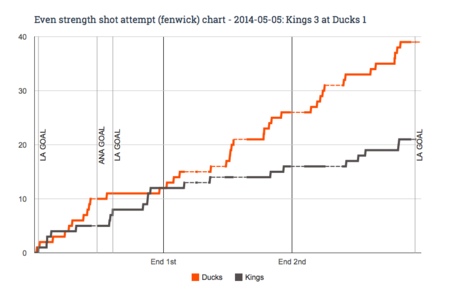 I wrote about the Kings and Devils earlier in the season, touching on the fact that not all puck possession is equal possession. Both of those teams killed it driving play but weren't lighting it up in the goals department. (Both teams had low goals against too.) The point of the game is scoring, and having the puck closer to the opposing net should increase the chances of that (while also decreasing the chance of being scored on). That's good puck possession, obviously. On the flip side is the empty calorie possession, like in the Ducks game last night.

Remember: a shot attempt measures where the puck is at on the ice at that time. Last night, the Ducks had the puck in the Kings end most of the game. This is accurate, confirmed by numbers. But last night the Ducks also didn't really generate very many good scoring chances. In that sense, the puck possession they displayed did more to prevent additional scoring against than it did to promote added scoring for, and here we are today, down two games in a best of seven.

Driving play is well and good, but driving useful play is still the goal here. Applied to last night, the Ducks had a ton of possession but didn't really do anything with it. They never got inside. They didn't get to loose pucks after their initial shots or spread the Kings defense out by moving the puck well down low. They didn't make Jonathan Quick work the same way he had to in game one, when the Ducks out-chanced the Kings to the moon (despite relatively even possession numbers).

Ultimately, scoring chances are the real measure of a team's offensive zone effectiveness. We cheat with Corsi/Fenwick because given a large enough sample, the correlation between possession and chances is very high, much like it relates to an accurate portrayal of time on attack. But also shot attempts are measured by the league already, whereas chances are generally measured on a team-by-team basis. We have the former available to us, not the latter. Real advanced stuff, see.

At even strength in game two, the Ducks had eight scoring chances to the Kings six chances. So look again at the above charts. The Ducks should have generated more than eight EV chances from all that OZ time. That's the bottom line. That's what Ryan Getzlaf means when he says post-game that they weren't near the net enough. That's what I mean when I say the team didn't make Quick work hard enough. Because in game one, the Ducks had 17 even strength chances against the Kings five chances. That's what I mean by "empty calorie possession."

The positives to take from this? The Kings generally drive play really well even with the lead, but the Ducks had the puck way more last night. Aside from their inability to generate chances, they are taking play to the Kings really well through two games. They are hanging with (and don't get crazy here) the better roster of players. Because the reality is, the Kings are built for now, and the Ducks are built for tomorrow. Maybe I'll get back to this after game three, when I'll be discussing how great the team played en route to a victory.