Kid is back to tell you something about retrieving pucks off the dump-in, buddies!

Share All sharing options for: Playoffmetrics, Round Two: Game Three

Game three featuring the Anaheim Ducks and Los Angeles Kings is the total opposite of game two in every capacity. This is great stuff! Let me break it down a little for you folks.

Here's the shot attempts (no blockies!) chart from all game states, courtesy of extraskater: 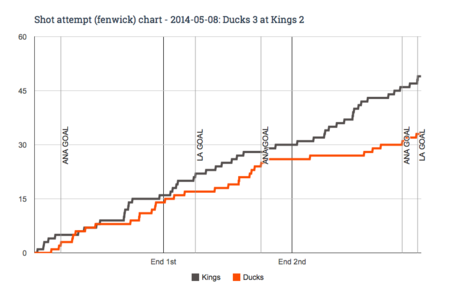 Here's the even strength shot attempts without them blocks: 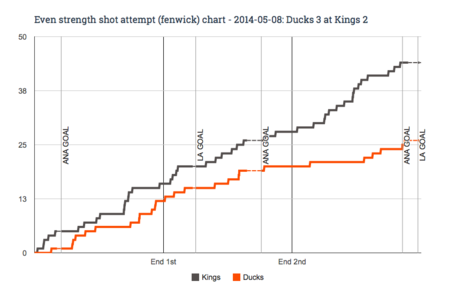 This is a bit ugly on the surface. The Kings had the puck in the Ducks zone more often in this game. Once the Ducks jumped out ahead after Teemu Selanne scored, this possession share was expected. The problem I have is that the Ducks lost the possession edge when tied, which feels like a pretty big gamble against a Kings team that really knows how to capitalize when playing their game.

And the Kings played their game better last night than in the previous two, although I still don't think they played as well as they did at times against the San Jose Sharks. When the Kings are on, they are clogging up the neutral zone and standing up the blue line to prevent clean carries and encourage dump-ins. For all the hyperactivity of Jonathan Quick in net, one thing he does well is communicate with his defense in when to play the puck on a dump and when not. Because of how the Kings line up against entries, they tend to want him to stop hard-around dump-ins, and they get back quickly to start the transition the other way.

This is a perfect digression point, actually. Boudreau said after the game that he started Frederik Andersen because of his record at Staples. (To that effect, Jonas Hiller's record at Staples has almost never been very good, but that doesn't have anything to do with the arena and everything to do with the Kings being a really good team.) I think this is garbage but also the safest, media-friendly explanation. It seems clear that after the end of the season, Boudreau and staff trust Andersen more in net than Hiller right now. They were looking to get him back in after Hiller dropped two. Hiller was great in both games in my opinion.

But beyond that, Andersen plays the puck similar to Quick, and I think Boudreau wanted to meet the dump-heavy Kings forecheck with the same level of disruption as Sutter uses within his scheme. For one thing, Boudreau has been pretty outspoken that he thinks the Kings have a better forecheck than the Ducks. That's the biggest difference between the two teams, in his esteem. Reading between the lines, I think it's a bit of an implied admission that his defense isn't as good as the Kings defense, but at least identifying an area tied to tactics gives Boudreau a chance to counter it with what he's got.

Andersen was pretty rough early on. He was rusty. He seemed a step behind, he reacted to pucks a half second behind, and he left some juicy rebounds. (Again, all butterfly goaltenders will do this anyway. The difference here is that many of the early kicks were uncontrolled, whereas he was kicking pucks out with more intent as the game went on.) But he settled down eventually and was less sketchy to watch. But what he did right away and without shakiness was play the puck a lot, and eventually the Kings began targeting specific defensemen when entering the zone. This allowed a smaller defenseman like Sami Vatanen to use more of his mobility to move pucks rather than fight for them along the boards.

Back to the game. What the hell was I talking about again? Oh yeah, oh yeah, so the Kings seemed to play more of their game in this one. And aside from some lapses in carrying play (as well as some bad breakouts) the first half of the game, the Ducks actually got back to their game better as well. The Ducks have made a point of working to get inside on defenses all year. When the top two guys are Ryan Getzlaf and Corey Perry, guys who excel at holding the puck when coming off the wall, it is easier to play this way.

Unlike in game two, when the Ducks pressed with shots from anywhere (without much traffic or rebound efforts), they held onto more and sacrificed attempts for passes. When the team is off the mark, this looks tragic and awful, and we have to hear Hayward's cliche "they're being too fancy." But when it works, it leads to the type of weird percentages that have defined this team all year.

Namely, they tend to get out-possessed while hanging even or outright out-chancing opponents. This is not an advisable way to play, because shutting down a team's ability to create from the slot is easier than trying to hang on to the puck (see: game two). It is nearly impossible to effectively and consistently do from behind, which is also why the Ducks are a much better possession team when trailing. They hang onto the puck *and* they generate chances, a la the Chicago Blackhawks or Boston Bruins. The ideal is the possession of game two and the chances of game three. Or basically how game one was, but without an error with seven seconds left. So there you go.

In game three, the Ducks sacrificed zone time to work inside against the Kings and create more chances against Quick, at evens and with a man advantage. How did this happen? Weirdly, Sutter got away from matching Anze Kopitar against Getzlaf, and the top line of the Ducks ran the show against everyone else. I put this more on Sutter than on Boudreau, to be honest, because it seemed like Gabby was willing to allow that matchup at home and gamble with depth versus depth. (Which is dangerous, because the Ducks aren't as deep as we, the fans, like to think.)

It wasn't until the third period that Kopitar began going up against Getzlaf again. I don't expect the two to be far apart in game four either, so it will once again be a game decided by depth play. Which also means an effort more like game one will be required from everyone, including any new additions. Speaking of...

We know Matt Beleskey is questionable, and with Daniel Winnik waiting (and capable of fulfilling a similar role, if asked) I don't think it's difficult to guess that he'll play. John Gibson is en route from the Norfolk Admirals, so we can assume Andersen is out. I likewise think Mathieu Perreault is not fully healthy, and he left the ice slowly after his last shift in the third. Perhaps Rickard Rakell draws into the lineup between Patrick Maroon and Selanne in game four.

Meanwhile, Vatanen was outstanding last night. I really hope we've reached the time when Devante Smith-Pelly and Vatanen are never off the roster, because they are awesome. We will need energetic play from guys like them and a more complete effort to even up this series.