Spezza and Kesler and Thornton, oh my!

By now, we are all hearing the rumors that the Anaheim Ducks are interested in acquiring a second line center. First of all, a disclaimer: any article that you read suggesting the Ducks believed they were beat down the middle against the Los Angeles Kings is slightly misleading. While the Kings are deeper at center (in large part due to Mike Richards playing there on the fourth line), the Ducks had a young center sitting in the pressbox for most of that series. That tells me the depth is there and the reality is realized more simply: the individual play of Anaheim's centers didn't beat what Los Angeles threw at them.

That does not indicate that the Ducks are unhappy with the position in general, which is how I'm seeing some of these rumor articles going. The only areas that I'm aware the team is concerned with after this postseason is the defense, the structure of play in the defensive zone, and special teams in general [Ed. Note: As Murray explicitly stated on exit interview day]. With Saku Koivu likely being gone next year (or signing a very friendly deal to stay in a depth role), there is room for a player like Rickard Rakell to play. There is also room for the Ducks to kick tires on some of the big names out there while focusing on areas of true need, some of which are getting addressed with the change in assistant coaches.

The three big centermen rumored to be available for trade are Jason Spezza, Ryan Kesler, and Joe Thornton. (The latter is being speculated as moving but isn't actually being shopped at this time, to be fair.)

The most obvious name associated with the Ducks is Spezza, who has asked the Ottawa Senators to be traded. I suspect there is some truth to Anaheim kicking around the idea of this player with Ottawa. There is a history of dealing between the teams as seen recently with the Bobby Ryan trade. Additionally, captain Ryan Getzlaf is familiar with Spezza and could possibly advocate in his favor should he be asked, (And he would be, informally) though maybe not as fervently as was the case with Dustin Penner last summer.

Beyond that, what the Senators are reportedly asking for is a similar package to what they gave up to acquire Ryan. They want a first round pick, a good prospect, and a young roster player. Nick Bonino is a player the Senators are reportedly very interested in acquiring because of his position and contract. (He will likely be the biggest dangle for any centerman trade the Ducks make, so maybe get used to hearing his name too.)

Another player who has asked for a move from his new Vancouver Canucks bosses is Kesler. He wants to compete for a Cup and has soured on the organization up north. From everything that I have heard and seen, Anaheim offered a boat load of draft picks for Kesler at the deadline. The Canucks in turn asked for one of Rickard Rakell, Emerson Etem, or Devante Smith-Pelly, Sami Vatanen, as well as a favorable draft pick (rumored as a second or first). Vancouver didn't want to deal in futures only because it would send a "rebuild" message to the fanbase, and that market is very sensitive to season ticket holder fluctuation.  [Ed. Note: Don't get Vancouver fans angry.  You wouldn't like them when they're angry. -CK]

It is possible the Ducks will reconsider trading for Kesler this offseason, but GM Bob Murray has indicated that he will not be willing to part with as much as he was willing to part with at the deadline to make the deal. I suspect Vatanen's play against the Kings has more or less taken him off the table, and by all accounts Boudreau has been salivating over getting a chance to play him anyway. I can't see Anaheim dealing Rakell for an aging asset given how highly scouts think of him. That leaves Etem or Smith-Pelly and a prospect and/or pick(s), and I highly doubt the Canucks go in-division for anything short of a killing.

The third name being bandied about right now is Thornton of the San Jose Sharks. He has a no move clause of some kind in his new contract, which he incidentally signed at a team friendly rate. (Ouch, Sharks.) Moving him will be a very tricky situation but San Jose's seems to be putting it out there that they may have to rebuild for a couple years. Yes, they are using it as a ploy.

The R-word here is one they are hoping scares off Thornton and fellow teammate Patrick Marleau into waiving their no-moves. However, both players would control where they can go (think Jarome Iginla going to Boston, no wait, Pittsburgh). Thornton reportedly wants to stay in California. That makes his first likely options Los Angeles or Anaheim.

Los Angeles has a bit of a situation coming up this offseason and will be hard-pressed to make a Thornton contract fit without a significant shake up. GM Dean Lombardi is notoriously loyal though, so the likelihood he falls in love with a few guys after another Cup is high. That leaves Anaheim as a probable potential destination, should Thornton be serious about going. The problem with that? San Jose would almost certainly ask for players I'd be pretty uncomfortable giving up, namely Rakell and Vatanen.

Who knows if the Ducks are real serious about spending youth on one of these three old dudes. Perhaps something in their numbers can excite Anaheim into making a deal. Here's how the three compare last season, courtesy of extraskater. 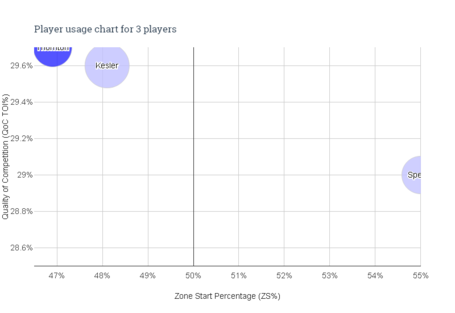 The elephant in the room is obvious: Jason Spezza might not be the player the Ducks need to revitalize that second line. He sees sheltered starts and is slightly below level on a decent possession team. There's no reason to suspect he'd drive play in Anaheim. I suspect his best years are beyond him already, which makes the asking price steep.

The other obvious thing we can see here is that regardless of age, Joe Thornton is stupid good at hockey. He sees the toughest starts and competition and still comes out driving more play than most on a team that possesses the puck very well. Given his skillset, which prioritizes strong positioning and his vision over skating, there's no reason to think he won't play out his contract either.

Middling in my mind is Ryan Kesler, who isn't as offensively gifted as Thornton or Spezza. My concerns with him are twofold: a) are we getting Saku Koivu 2.0? b) what will the Canucks need to pry him free? I highly doubt Vancouver will deal reasonably, given its ownership.

The bottom line for me: Spezza isn't as good as advertised, and I hope the Ducks stay away. Especially if the asking price includes any young player. Both Spezza and Kesler have enough injury history that, with their age, I'd only want to move on them if the trade was futures alone. But if Thornton actually tells his organization to explore Anaheim, I wouldn't be opposed to having some conversations.

One last set of numbers to ponder.

Kesler/Thornton/Spezza/Stastny Corsi Relative comparison (Someone remind Joe that he turns 35 in July)... pic.twitter.com/RD33WEKGUq