Take a quick look at four key RFAs as we head into free agency.

The free agency period is upon us, NHL fans. What this means is that there will be a brief period of absolutely terrible decisions made that we get to enjoy entertainingly. I like this time of year.

I probably like it more because the Anaheim Ducks tend to avoid making really stupid decisions at the beginning of free agency. I suppose there's always time for the organization to change, but I don't suspect the team to be foolish here. So I get to watch other teams do it. Great!

But free agency does start a phase that matters to all teams, even the ones not making hilarious signings right away. Restricted free agents also "hit the market," as it were, in this time. All teams have to deal with their impending RFAs.

Here's a brief consideration of the Ducks RFAs I want to talk about and my thoughts on them.

Perreault is an interesting player because he's primarily played third or fourth line minutes in the NHL and has an as-expected 0.49 points per game rate going in his favor. Sure, his average minutes went up by a couple in Anaheim, but by and large he was still either a third or fourth line center after Ryan Getzlaf and Saku Koivu on most nights.

He's a player I want to take a chance on and grow with. In his junior and minor league seasons, he put up massive points. His career shooting percentage sits high, which suggests he may possess an above-average shot or at the very least an ability to use it in close. In Washington, one can surmise that his limited role put him with less-than-average depth wingers, which would have hurt his points production. In Anaheim, he played with Teemu Selanne most of the season.

This makes me think the capability for him to provide more production is there, all told. His play down the stretch and on the power play lend weight to my belief. Imagining Perreault with better offensive weapons on the wing could up what he adds overall, and maybe he can slot in as a second or third line center on his own. My only concern with him is his size and therefore durability, but by no means do I think that should scare the Ducks away.

Silfverberg is a young two-way winger who has the potential to provide forward-moving play if not more production than we have seen. In my mind, he is the perfect third line player with offensive upside. He can play difficult minutes and still turn play while occasionally scoring on his own, which every team needs.

After coming back from injury last season, Silfverberg began playing with Koivu and Andrew Cogliano as a sort of checking line. By and large, they did a good job in terms of goal prevention, but it came at the cost of a possession edge. A lot of that is due to Koivu's falling off after his own injury in Columbus.

The problem with that concession (lack of offensive zone time) for Silfverberg is that it likely suppressed his potential production for the club. His career shooting percentage and points trends suggest that he is a volume shooter, in that he needs a lot of attempts before netting goals. It also suggests he's not the offensive winger who replaces a player like Bobby Ryan on his own and shouldn't be judged as such.

Despite that, there's no reason Silfverberg couldn't net a few more goals while playing on a positive possession line next season. I was a fan of the early pairing of Perreault and Silfverberg that coach Boudreau went with the start the year and could stand to see more of that going forward.

I am going to save myself time and space and just refer to him as S-Pelly (when I'm not calling him Devo) from now on, so no offense to my hyphenated name readers out there. S-Pelly is perhaps a player who is coming on and is not a 100% known quantity at this time. What I mean is that the player we saw more toward the end of this year and into the playoffs was not the player we saw most of early on.

When Devo first started with the club, his potential was pretty evident: he's big, he's built like a truck, and he skates ridiculously well. His junior play suggested he could top out as a second line offensive player but it hadn't translated much above his playing days in the OHL. But the hands were always a potential to show up. With the Ducks, he's primarily been used in a checking role to take advantage of his size and skating ability.

By all accounts, his play matured last season in the AHL. He became a more rounded player, contributing offensively but having a bigger effect on the game in all zones and situations. When he came up to Anaheim, he was much more involved in the play when on the ice, regardless of usage. And his playoffs speak for themselves.

So is S-Pelly the checking player we've seen the most or the player who can pot goals and run people over on the forecheck? He's absolutely worth gambling on assuming he's serious about continuing to mature his game.

Vatanen should be an essential piece of the defense in Anaheim going forward. His contract allowed him to move between the Ducks and the Admirals without waivers, which I was led to believe was the main reason he wasn't playing more. By the end of the second round in the postseason, Vatanen was playing the third most defensive minutes along with Hampus Lindholm and Cam Fowler.

Not coincidentally, those two are the only other defensemen who are better than Vatanen on the roster, and even then "better" is a stretch. "Different" and "equally talented" is fine by me. But a blue line backed by Fowler, Lindholm, and Vatanen is very good. I really hope this is the top three defenders on the team going forward.

The thing with Vatanen is that he's more of an offensive defenseman than Fowler is. For reference, he has as many points per game in the NHL as Silfverberg. Obviously they play different roles (and have different games played), but that says something more about Sami than about Jakob. But prior to last season, Fowler was the defacto offensive defender, and most teams don't like having more than two.

Fortunately for everyone, Fowler has shown himself to be more of an all-around defender who can contribute points, the prototypical "puck moving defensemen" the league is finding room for. This is probably easier for the organization to deal with when looking over at Vatanen then. He can fulfill that second or third pair need for a puck mover while captaining the power play and getting mad points without the risk of carrying too many of the same type of defender.

Anyway, as you discuss and ponder these wonderful things I've written about, here is a usage chart for these four guys from the regular season, courtesy of extraskater.com. I didn't mess with minutes or situations or anything because this is just to serve as a sort of broad impression of use. Plus pictures are neat. Blue is good, red is not good. 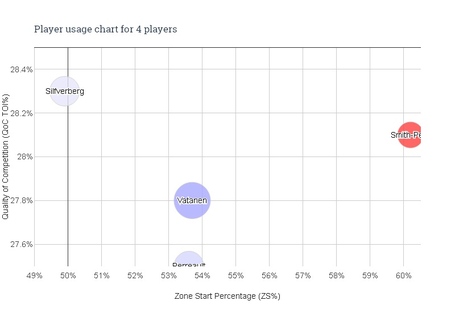