"He's a big, physical, tough guy. When he's playing and using his size and strength he's tough to knock off the puck. He goes to the net hard and has that power-forward mentality that's tough for people to handle. He protects the puck and has an excellent shot off the rush."

"Nick is a powerful player and when he is skating and driving hard, he is extremely difficult to stop. Very good along the boards and can quickly win a puck battle and create a scoring chance. With his skating and size, he opens up lots of opportunities for his line mates. Players like him are not common."

"Ritchie's physical game is fantastic. He's 6-3, 235 pounds and aggressive. Ritchie attacks defenders, and is great protecting the puck. It will obviously be harder on him in the pro game, but it was near-impossible to get the puck off of him at the junior level. ... He's got a good skill level, too. Ritchie's shot is of the high-end variety with a lot of weight behind his snaps. His defense needs some work, and he has a tendency to disappear at times (which is difficult for such a large player)."

A common question I get from TOR fans: Nick Ritchie and Jake Virtanen are not Tyler Biggs type of prospects. Much more skilled players.

"Ritchie is a prototypical power forward with an impressive blend of size, skill and strength. He skates well for a big player and has agile feet. He bulls his way around the ice and has an impressive, erratic shot."

Hockey's Future Mock Draft had him going to the Ducks

"He is extremely strong and loves to crash and bang on the forecheck. He needs to maintain a more consistent level of play from game-to-game, as well as show a little more urgency in his defensive play, but he has the potential to be a quality NHL forward."

Ritchie had a five goal game in February where he tied the Pete's record held in part by his brother, Dallas Stars prospect, Brett Ritchie. [NHL.com]

Assisted on the game tying goal and scored the winner in Game 7 of Peterborough's comeback from a 3-0 hole in the playoffs against the Kingston Frontenacs [NHL.com]

Initial Reaction: Big body with hands and a nice shot... sounds like a Brian Burke pick to me but that tweet above from Corey Pronman is promising.  Earlier today Eric Stephens tweeted the following:

Murray wasn't going to deal the No. 10 pick and told Benning from start. Heard earlier ANA scouting staff was begging him not to move it.

It should be interesting to hear comments from Murray and the Ducks to read between the lines and see if Ritchie is why they were so intent on keeping that tenth overall pick.

Either way, he should have plenty of time to develop, considering the Ducks prospect pool in general as well as the presence of guys like Devante Smith-Pelly and Patrick Maroon in the lineup with the big club.

Update: First comments from Ritchie himself via AnaheimDucks.com

Update 3: ... And some additional information from Maple Leafs Hot Stove.  Apparently they really wanted the Leafs to pick this guy.  In any case, big thanks to them:

Nick Ritchie is a skilled forward who blends hands, speed, size and aggression into a tantalizing package. Should he should reach his potential, Ritchie could be a dominant NHL power forward.

Let the debate begin. Did the Leafs settle for less skill upside in favour of size going with Ritchie over Nikolaj Ehlers or perhaps William Nylander? The Maple Leafs just added a heavy  winger who would be able to step in on the wing and become their biggest player instantly. He could help as soon as next season, although that remains to be seen.

Nick Ritchie - Bob McKenzie
Nick Ritchie, The Peterborough Pete big winger; all the physical tools to be a outstanding, big power forward, but in 3 OHL seasons he's had problems with injuries and inconsistency of effort and results, which scouts say mark him as a high risk, albeit high reward forward.

"I have Ritchie ranked first in North America," the scout said. "I'd have to see more of any European kids, but I wouldn't have any problem with him as first overall."

"Assistant captain's strong efforts in the post season helped Peterborough come back from a 3-0 deficit to defeat Kingston, where he scored the OT winner in game seven .. a bullish power forward who has silky smooth hands and understated stick handling skills .. a graceful skater propelled by a smooth glide and better than average quickness .. his best offensive weapon is a lightning quick shot with a hair trigger release point .. not a punishing hitter but he can explode into players and opponents bounce off of him if they try to reciprocate a hit .. criticized for not playing to his potential, with inconsistent work habits at best .. prone to extending his shifts too long, becoming stagnant in the defensive zone, competing with wavering intensity and exhibiting suspect body language when coming off the ice .. Ritchie's hockey sense can also come into question with his decision making off the rush .. oozes pro potential due to his blend of size and burgeoning skill set .. must understand that he has the ability to be a difference maker on each shift and play both ends of the ice .. boom or bust tag attached." - McKeens 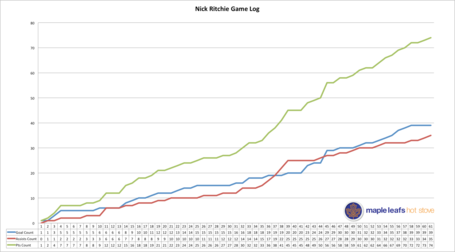