Palmieri by the Numbers

What does Kyle Palmieri do for/to the Ducks? In chart form.

Share All sharing options for: Palmieri by the Numbers

Chris and I were emailing a bit about the Ducks [Ed. Note: and Tim Howard's Everton FC, COYB -CK] and we stumbled onto the topic of some of the younger wingers on the roster. That got me thinking about Kyle Palmieri, who is one of the more fascinating young forwards the Ducks have. He is 23 years old, so one feels like he can still develop some. He put up 2.19 points per 60 minutes, which is pretty good considering he averaged about 10 minutes per game. But he's also a bit of a possession nightmare.

He finally played roughly a full season last year, so I wanted to take a look at his numbers and sort of visually express how interesting he is as a developing player. In terms of time on ice, he's more or less in the fourth line bucket. What perhaps sets him apart some is his power play time, which most fourth liners aren't getting. Fans see his rate of production and his minutes and get a bit unsettled: why isn't this kid playing more?

It's a fair question indeed, and I think the easiest way to guess at the answer is to look at his possession numbers. As a middling possession team in a pretty strong division that runs four lines nightly, I suspect there's something to what he's doing (or not doing) that prevents him from being a top six guy.

Let's start simple: this chart shows the breakdown of everyone he's played with, excluding goaltenders (unless I forgot to remove any). 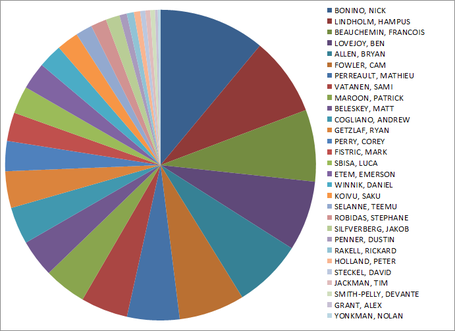 Ok, now look at who he played with among the forwards (again, if I overlooked a non-forward here, oops). 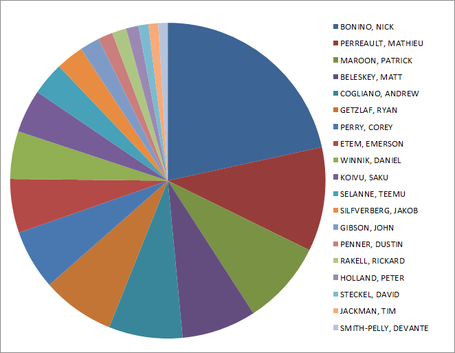 Palmieri played most with Nick Bonino (no surprise), Mathieu Perreault, Patrick Maroon, and Matt Beleskey. Not coincidentally, all were fourth line players at various points of the season. They also each worked their way up the lineup at various points and sustained stronger possession. We'll see in a second if Palmieri achieved that.

Next, let's look at this basic possession numbers. Because Palmieri played so few minutes, I removed games in which he appeared in less than 10 minutes of even strength time. The reason I did so is to remove excess noise from games wherein his numbers might not be entirely in his control. I figure 10 minutes of 5v5 time is probably 12-plus shifts taken, which is certainly enough to control the flow of shots.

The above method left me with a sample of 46 of his 71 games played. That's good enough for this analysis. 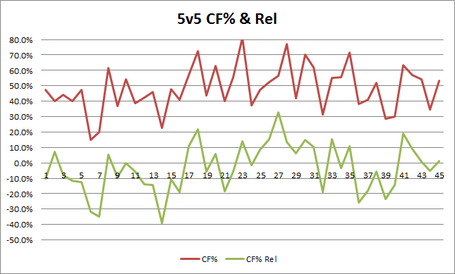 The top line shows his total on ice Corsi share percentage. As you can sort of determine, it averages around the upper 40s all told -- which is exactly consistent with his 71-game 48.2 CF%. For a fourth line player, that isn't too bad. But keep in mind it also includes his numbers in games out of reach either way.

This doesn't seem real bad to me. How did he do in score close situations, I wondered. It took me several hours to compile this data because it isn't readily available, but I found 43 data points out of the 71 games played. I did the same thing here as with the above and capped the chart to games in which Palmieri played over six minutes when the game mattered. That is anywhere from eight to 10 shifts or more; fourth liners rarely take minute-long shifts unless stuck out there.

One thing I want to note here before dropping in the chart though: Palmieri's score close minutes suggest a bit about the trust he's earned with Boudreau. I have a thought on this I'll try to return to. This is again, however, why we like to use score close data. It tells us what is happening when games matter, when two teams are still playing to win. 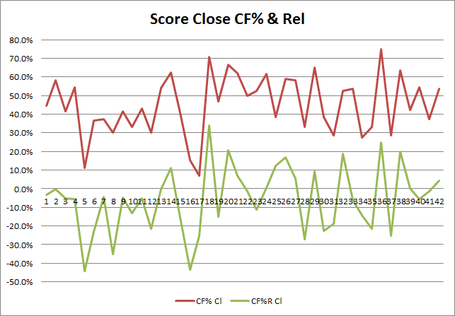 This is about the same thing as above but shows a drop of about 5% on each line. The average for the top line, Palmieri's CF% Close, is about 42-ish. His Corsi relative drops from -2.8 to about -8.0, more or less. (I'm being vague because I don't much want to go calculate the data sitting in my spreadsheet after so much work.) So obviously, when the game is more important, Palmieri impacts the Ducks' possession more negatively. It is perhaps more understandable why Boudreau would go to him less in important minutes.

This upped my curiosity about how Boudreau used him then. The Ducks want to roll four lines. In the modern game, this is basically line one seeing the best minutes, line two checking against the best minutes, and lines three and four trying to position the top lines for better starts. Scoring is more an expectation though, whereas before it seemed like it was just an added benefit on the way to letting the top guys post points. Skills (or skillz) parity.

I ran Palmieri's score close CF% relative to his team next to this zone starts. (Because after several hours gathering the data, like hell was I only using it once.) Was Boudreau putting him in the best position to succeed? We already know Palmieri saw 51.7 ZS% because it is easily checked. How does it look next to his possession? 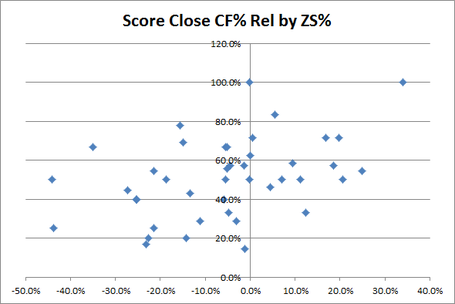 This is more telling to me. It might not be as evident to you, dear reader, so I also created this to state it more clearly. 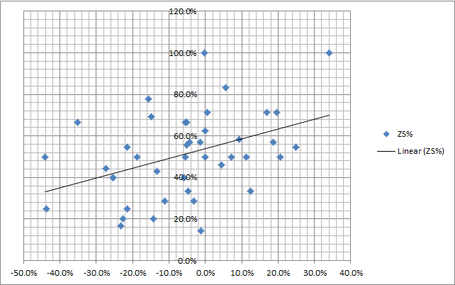 There's a slight rise in his ability to generate more shot attempts with his starts. This is fundamentally true for every player of course, but the ideal here for even a fourth liner would be to see a more marked jump in possession share. As a fourth line player, Palmieri is typically seeing the ice against weaker competition. Starting closer to the opposing net should make it much easier for skilled players to generate shots.

This is where I think Boudreau doesn't have a lot of faith in the player. When he gives him favorable starts, he doesn't pay the team back enough to continue earning more minutes. Some of that could be his linemates, which I'll address momentarily. But in large part I have a theory on Palmieri and this stuff: he's still learning how to think the game. When Corey Sznajder of Shutdownline.com completes his zone entry data project, I suspect one of the curious things we'll see (besides the fact that Corey Perry actually drives the bus more than Ryan Getzlaf) is that clean carries by Palmieri don't tend to result in shot attempts unless it is a clear breakaway. I'll update you when I get my grubby mitts on the data though.

For sh**s and giggles, I ran a little side chart to give an example of a slightly older player, Maroon. He saw similar minutes on average throughout the year, but his possession numbers were a bit more evident. Unlike Palmieri, I didn't run his score close data, because I have a life and job and this isn't it. But like with Palmieri, I grabbed about 41 data points (including a few nine-plus minute games to get there). 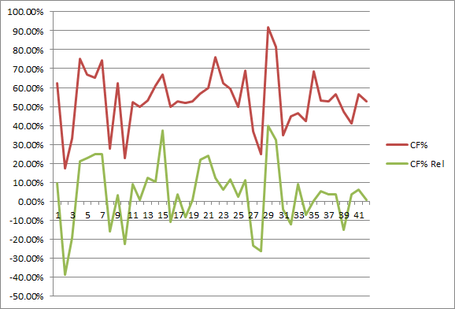 Maroon put up 50-plus CF% and was a positive Corsi player relative to his teammates in similar minutes to Palmieri last year. There's some quality of teammate effect in play here, but by and large pucks go on net more when Maroon touches them. Once more, the zone entry data is going to tell me a lot here, because even money is Palmieri's entries have a lower resulting shots/entry rate than most players. (Someone look me up for this bet when the data is made available.)

So, teammates then, right? I took the top forwards and then the top defensemen Palmieri was on the ice with throughout the year and ran some WOWY (with or without you) Corsi numbers. I saved these for last because they actually make the case for limiting Palmieri's minutes more than anything else. 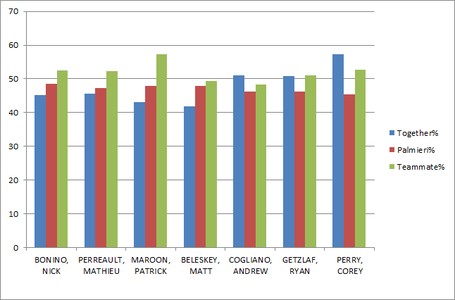 With the forward group, he made every pairing worse than his own below-average possession share except Andrew Cogliano, Getzlaf, and Perry. However, every player other than Cogliano was better away from Palmieri than with him -- and every player to a man was better than Palmieri's individual numbers when apart. 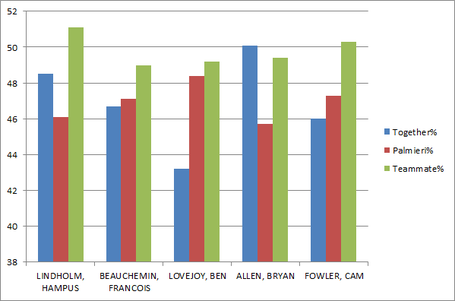 If you had Palmieri and Bryan Allen being the best together here, put your hand up? (Hey, maybe there will be a future for Clayton Stoner yet if he connects with Palmieri so well!) Once again, every player listed here was better away from Palmieri. Lindholm and Allen connected well with Palmieri and I suspect that is because of the sides of the ice being played and how it falls out during breakouts. But that ALL players are so much better without Palmieri concerns me.

After doing all this, I think there's gotta be another level of data that's needed to figure out what Palmieri's doing (or isn't doing) when out on the ice. The preliminary figures here, which falls true throughout the entire lineup (and I just didn't chart them all), show that Palmieri is actually one of the biggest drags on the Ducks' overall possession. Whenever he plays with (nearly) anyone, they tend to be worse off for it. For a player with 2.19 points/60, there's a lot of wasted energy right there.

One last thing: if you are at all curious about the zone entry project I am referencing, give Corey a follow @ShutdownLine and ask anything. He's a university student who is watching every NHL game (all teams) in his spare time and tracking all zone entries (and exits) and certain events, like entry type (carry vs dump) and whether shots happen after, etc. I have seen some of his data and it is fabulously useful. You should donate to his cause to help a student out, but also doing so will grant you access to his published data when he finishes (which is soon). Donate here.