Some thoughts on the Ducks prospects who beat the Sharks Rookies twice this weekend.

The Ducks' Rookies swept the Sharks' in a two game series this weekend.  Saturday at Anaheim Ice the Ducks prevailed in a shootout 5-4, and yesterday they won 2-0 with the shutout going to Igor Bobkov.  While it is somewhat satisfying to see the Ducks beat the Sharks in just about any capacity, in this kind of situation, results are of little to no importance.  So what did I think of the Ducklings who were out there?  I'm glad you asked....

Before I get into the nitty gritty of who did what, I have to share a quick story.  I had just found my seat for the game at Anaheim Ice, and I was scanning the room to see what was going on, when I noticed Sharks' head coach Todd MacLellan. Naturally I took out my phone to see if I could snap a quick picture surreptitiously, but it didn't really come out.  So as I turned around and put my phone back in my pocket I was startled to be face to face with one of the ugliest humans to have ever walked this Earth. 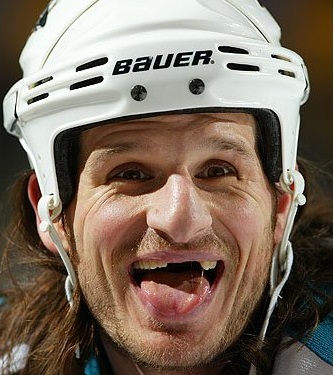 That's right... Mike Ricci was walking up the stairs right at me, eating a bag of popcorn.  To his credit though, he wasn't all gross and sweaty, he didn't have the scruffy beard or any niks/cuts on his face from playing hockey and he may have even had some front teeth in.  So it was not the full experience of Ricci, but an honor nonetheless.  Anyway.... Unfortunately I was only able to catch the first period of this game, but such is life with a two year old.  The two Ducks' stars of the first period to me were Josh Manson an Rickard Rakell.

Honestly, I was a little surprised that Rakell was even involved in this.  He was the only player on either roster with any NHL experience at all with 18 games last year, plus four in the playoffs and four the previous season.  But I guess it showed, he was clearly a go to guy on the power play.

The first man advantage for the Ducks on Saturday fit right alongside what we would have seen from the big club last year.  In other words, it was pretty terrible, however, in their defense they've only had a couple of days to work with each other.  The second power play was much better and Rakell was the trigger man.  I didn't take note of the exact number of shots but he must have taken at least three or four before scoring.

The other thing I liked about Ricky Raccoon on the PP was that he wasn't stationary.  Some guys (Ovechkin, Stamkos, Selanne) can make that work, but for me a power play unit is at its best when guys are moving around.  Rakell clearly preferred to be in the left circle, but gave the Sharks' killers other looks too from both of the points and digging out pucks from down low.

Manson also mostly caught my attention for one really good shift, but it was even better from the 6 foot 3, 200 lb defenseman.  First of all, maybe it was just a matter of being in a more enclosed space at Anaheim Ice, but he looked bigger than 6-3, 200 and he used his size well to win pucks below the goal line and along the boards.  But his big shift that made me take notice and check to see who that number 42 was came when he leveled a Sharks player behind the Ducks' net then battled to win the puck out of a scrum in the corner, skate it out of the zone and zip an outlet pass to a streaking forward.  I've only heard good things about his play in Norfolk and he lived up to the hype, so good on him.

The only real negative thing I saw from the Ducks prospects on Saturday was Shea Theodore getting absolutely drilled coming across the offensive blueline.  As he was carrying up the right wing a Shark nailed him with a hip check from the left side that sent off his feet and flying about five feet into the boards.  It was like a hit from a video game that you pause and re-watch from all different angles.  Naturally this is a rookie showcase so maybe guys are looking for the big explosive hit a little more than they would in a regular game to get noticed by the coaching staff, but it works the other way too.  If you get laid out that hard in a rookie game, you've got some work to do before you hit the NHL.

In case you missed it, here is what some of the Ducks players had to say after the Saturday game on Anaheimducks.com.

Since I finished with Shea Theodore from the Saturday game, let me start with him here.  It's a pretty quick review, he didn't do anything particularly special.  As Kyle pointed out in the mini podcast we recorded from outside the building right after the game, that's fine, and sometimes even a good thing for a defenseman to play a more conservative game and not be noticed all that much.
The problem with that, from everything I've read/heard about Theodore is that he's not that kind of player.  He is supposed to be a dynamic skating/puck moving defenseman who drives possession and so on and so forth, but we didn't really see any of that from him.  If we're not seeing it at this level where, as a first round draft pick, he should be at the top of the class as well as willing/able to show off some of those skills in an exhibition setting, then where will we?
It is possible that he had spoken with the coaches/front office of the team about working on his defensive game and they wanted to see how he's progressed from that standpoint.  In which case playing a safe, mistake free game would be almost like showing off to the brass, but that's a long way to go and a lot of speculation to justify a guy who didn't really live up to the hype around him.
The overwhelming first star of the Sunday game was Igor Bobkov with the shutout, which was refreshing to see after he got shellacked in the corresponding game last year against the Kings' prospects.  He made 29 saves in the shutout and probably four to five highlight reel stops, including the old school two pad stack in the second period that got everyone on their feet, except one Kings fan in front of us who claimed he sees Jonathan Quick do that all the time.  I have a lot to say about that comment, but I'll leave it to your imagination.
Bobkov seems to have been around the organization forever, but it turns out he's still only 23.  While it's good to see him play better than we have seen in the past, don't expect him to make his way to Anaheim after training camp unless things go seriously wrong.  After playing most of the year in the ECHL for Utah last season (29 GP, .921 Sv%!!!!) he could probably share the net with Jason LaBarbera pretty evenly in Norfolk this year.
Overall, the game started very slowly and very sloppily with tons of turnovers from both teams, but got better as it wore on especially for the Ducks who flat out dominated the third period, despite leading 2-0.
Nick Ritchie had a few good moments, including a booming hit behind the San Jose net in the first period.  As expected he set up right in front of the net during the power plays, of which there were many, but didn't cash in.  Maybe the most impressive part of his game was his skating with the puck.  The best way to describe it might be that he looked composed or always in control with the puck on his stick, whereas some of the other players were a little more frantic.
Finally Nic Kerdiles was again a standout.  In is post-game comments (embedded below) he mentions how he wants to show that he'll give 100% all the time.  That sounds like a pretty bland hockey quote, but dude was going balls to the wall in all areas of the game.  His obvious highlight was creating the turnover and finding William Karlsson with a pass for the first goal (side note: wicked snipe from Karlsson too!) but he was also out there taking a beating.
In the first period he took a stinger off the leg when he dove to block a shot and left the ice gingerly.  In the second he got hit with something (stick/elbow, not sure I only saw the aftermath) in the face and stayed down for a moment before getting off the ice under his own power.  He was also originally credited with an assist on the second goal.  And in the third despite playing with some cotton jammed up his nose, was one of the first to jump to Josh Manson's defense after the big blueliner got run from behind with a terribly dirty boarding hit.  And on top of that he was still diving to swipe at a puck for an empty netter (which didn't go in) in the final minute of the game.
Kerdiles is clearly on a mission to make the big team this year and if these last two rookie camps are any indication he's got a shot.  If not, everyone in Norfolk is going to LOVE him.
William Karlsson was also good, as teased by Bruce Boudreau in his post contract press availability, but beyond the goal I don't have any specific notes on him. And Rakell didn't play in this game.
We'll have a mini podcast to share some other thoughts from Kyle, Eric and Liz to post later today, but to close this out, here are the comments from the players' post game on Sunday.
Igor Bobkov: