The Colorado Avalanche are the defending division champs thanks to a last-minute push. Will they be able to retain the Central crown this year?

Offseason activities: With an embarrassment of riches in Chicago, it was only a matter of time before they had to let a few of their regulars go. The Blackhawks have parted ways with Sheldon Brookbank and Brandon Bollig most notably, and brought in Brad Richards from the New York Rangers. He will be centering Brandon Saad and Marian Hossa, rounding out what is sure to be another strong top six coming from the Madhouse.

Oh yeah, they also re-signed Patrick Kane and Jonathan Toews to Perry/Getzlaf-esque extensions, except with EVEN MORE MONEY. God.

This season: The Hawks have gotten into a groove where you know exactly what you’ll be getting with them. They’ll still be scary good, and are currently Vegas’ pick to win their third Stanley Cup in five years. Should they stay healthy, and if you’re a gambling person, it wouldn’t be a bad idea to put a few bucks on them to win the division at least. Realistically, I don't think they'll even finish lower than second in the Central this year.

Offseason activities: After spending the last ten years in Colorado with the University of Denver Pioneers and the Avs, Paul Stastny has been picked up by the St. Louis Blues. But no need to fret, Avs fans, you got Jarome Iginla! The former Calgary superstar-turned-NHL journeyman brings some more depth to the right wing position for Colorado, making their potent offense a little more balanced. He will likely be lined up with Alex Tanguay and Calder Trophy recipient Nathan MacKinnon, which is, without a doubt, a strong second line.

Also, our boy Jean-Sebastian Giguere finally retired. :( Since he didn’t get any playing time in Colorado’s first round loss to Minnesota, here’s footage of the last ice time of his career. Enjoy over and over and over again until your heart’s filled with happiness.

This season: It’s no secret that the biggest weakness of the Avalanche is their defense, yet they did absolutely nothing in the offseason to try and fix that problem. Expecting Semyon Varlamov to have another Vezina worthy year to constantly bail his team out is like asking for the moon. If something happens to Varly, the Avs’ full-time No. 2 goalie is now Reto Berra. If you do a Google Image search on "Reto Berra Avalanche", four of the first five images that come up are of him getting scored on. The fifth is a picture of Jiggy. So that’ll be fun!

Regardless, the offense should still put points on the board as consistently as they did last year (4th most goals scored in the NHL), but that one-sided game won’t fly if they keep trying to play it, as any Wild fan will be more than happy to confirm.

If the blue line can step their game up this year and cut down the number of shots they allow per game (32.7 last year), then they’ll end up clawing it out at the top of the division with Chicago and St. Louis at season’s end. Otherwise, they may be looking at a drop from the West’s second best team into a fight for a wild card spot.

Offseason activities: Jason Spezza is in Dallas now, making this the first season of his 11-year career that he will not be an Ottawa Senator. This also kills off the last trace of Ottawa’s super line that they boasted during their ’07 run at the Cup, with former linemates Daniel Alfredsson in Detroit and Dany Heatley now a Duck. For Spezza (and minor-leaguer Ludwig Karlsson), Dallas gave up Alex Chiasson, two prospects, and a 2015 second-round pick. I think Jim Nill did alright here.  [Ed. Note:  Mark my words, Jim Nill will win GM of the Year within the next two seasons. -CK]

This season: This team’s better than they were last season, which is a little frightening after watching the fight they put up against the Ducks in the playoffs. Dallas won’t be able to fly under the radar like they did last season on their way to the final playoff spot, and they should be able to put themselves in a better postseason position this year as opposed to a first round date against the West’s (regular season) best after climbing the Central Division ladder.

Offseason activities: Thomas Vanek! Minnesota hockey fans have been dying to see the talented Austrian in a Wild uniform for quite some time now, which has a good amount to do with this: 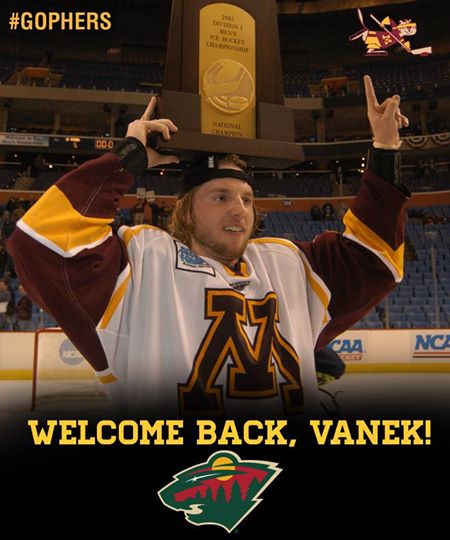 Nobody takes as much pride in having homegrown kids (Vanek and Erik Haula are basically considered honorary Minnesotans since they’re former Gophers) play for their team as much as the Wild faithful, but the 30-year-old’s primary appeal to Minnesota fans should quickly become his consistency in racking up at least 50 points almost every season.

On the flip side, Clayton Stoner, Ilya Bryzgalov, and Dany "50 in ‘07" Heatley are all gone now, but these three were disposable players, so neither of them should be any big loss for Minnesota.  [Ed. Note:  That's good news for us.... right? -CK]

This season: Since the signing of Zach Parise, this is an offense that has looked strong on paper, but hasn’t been able to convert that potential onto the scoreboard. Vanek will be looking to add some much needed firepower to the Wild roster which they’ll need in order to compete in the Red Light District known as the Western Conference. This will be a playoff team again; they’re still better than the outer fringe teams like Phoenix Arizona, but climbing the ladder to a higher playoff seeding will be, for the most part, dependent on their offensive output.

Offseason activities: James Neal is now a Predator, which is very good news for a team who has had a defenseman as their points leader for the last two seasons. Unfortunately, the trade with Pittsburgh required Nashville to surrender their second-highest point producer from last season, Patric Hornqvist, as well as Nick Spaling. Neal was one of the more reliable point producers from one of the Eastern Conference’s best teams, and the Preds will be looking for him to build on that role as one of their offensive ringleaders.

Joining Neal on the offense is former Winnipeg Jet Olli Jokinen, who was a big contributor at center behind Bryan Little. Mike Ribeiro and Derek Roy were also picked up for more depth inside the faceoff circle. Behind top dog Colin Wilson, this is a team that could very well be working from the middle out, and as we’ve seen with teams like the Kings, depth at center is incredibly important to a team’s success.

This season: As a whole, the offense has gotten better, so it’s presumed that they’ll see their 2.61 goals per game rise a little bit this season. Pekka Rinne returning to health after missing most of last season (though he wasn't his spectacular self in the 24 games he did play) will help, behind a defense that’s rather thin aside from Shea Weber. This team finished only three points behind the Stars for the last wild card spot last season, but the Western Conference, and the Central Division in particular, is just so stacked with talent, that I can’t really see the Predators sneaking into the playoffs even if the offense kicks their performance up a notch.

Offseason activities: Remember when the Blues traded for Ryan Miller midway through the season, and that was the piece to the puzzle that would FINALLY push this team over the hump and help them win their first Stanley Cup? Things didn’t exactly go according to plan, and the Blues committed a meltdown of epic proportions by tripping into the playoffs face first and promptly got bounced by a recuperated Chicago team. The masked man who was supposed to turn a good team into a stupid good team was not resigned, so now St. Louis has announced that they are moving forward in the crease with Brian Elliott and promising up-and-comer Jake Allen.

Furthermore, the Blues picked up one of the best free-agent centers in the market in Paul Stastny, and he should slide right under David Backes on the depth chart, making for a respectable 1-2 punch down the middle. With the addition of Stastny, St. Louis let Derek Roy go on his way, so their take one, drop one transactions resulted in a quick and easy upgrade of their centermen pool.
Also, new jerseys!

This season: The argument could be made that the Blues’ biggest weakness coming into this season is their goaltending situation. This isn’t implying that the Elliott/Allen duo is a poor one, but instead, serves as a testament to emphasize how ridiculously well-rounded this club is from top to bottom. Elliott will begin the year as Ken Hitchcock’s No. 1, a role that he’s not at all accustomed to. He has made the most of his opportunities, and has been, for the most part, a very reliable goaltender for St. Louis when called upon. Allen, on the other hand, is the Blues’ equivalent to Frederik Andersen; a 24-year-old with a relatively limited taste of the NHL, yet leaving proof that he belongs in the big league. He spent the entirety of the 2013-14 season with the AHL’s Chicago Wolves, but he will be a full-time Blue this year and ready to leave a longer-lasting impression.

If it wasn’t for an incredible collapse down the stretch, this team could have very well made a deep playoff run last year. The key parts of the roster remain, eager to wash that bitter taste of that meltdown out of their mouths. This team will be Chicago’s main competition in the division, and I wouldn’t be surprised at all if they even ended up redeeming themselves and taking the division crown that probably should have been theirs last season.

Offseason activities: Olli Jokinen has moved on, which is unfortunate for Jets fans since he made for a very efficient number two center. Devin Setoguchi is also no longer a member of the team. While the right wing position was well-fortified in Winnipeg this year with Blake Wheeler, Dustin Byfuglien, and Michael Frolik, Setoguchi added 27 points to ensure that the right side of the ice was always a threat to opposing teams.

The MTS Centre will be the new home of T.J. Galiardi and former Duck Mathieu Perreault this season as well. Both players are being brought in to provide a little depth scoring, but as we’ve seen with MP22 (technically back to MP85 now, I guess), he knows how to use that smaller frame of his to make some big things happen for his team.

This season: Winnipeg looks to be well-balanced offensively from left to right, and will be looking to improve on their 227 goal total from last season, the most out of any non-playoff Western Conference team. Unfortunately, it doesn’t look as if the Jets will be in very good shape to stop opponents from doing the same, as the blue line looks incredibly thin behind Jacob Trouba and Tobias Enstrom. To make matters worse, Ondrej Pavelec is arguably the worst starting goaltender in the NHL today, and he supported that argument with a .901 save percentage and 3.01 goals against average last season. By comparison, the cumulative stats for the Edmonton Oilers goalies last season? 3.07 GAA and .903 save percentage. A goalie with Edmonton Oiler-esque stats will not exactly be the most dependable guy in the crease.

Long story short, even though the offense should be fine, the rest of the team just looks way too weak to be any sort of threat to push for anything other than a sixth place finish in the division.