Many of you used Extra Skater to get into some numbers last year. Extra Skater is gone but your interest in tracking numbers doesn't have to be.

Some of you are wondering where to go to play with numbers and ponder the more analytical side of the sport of hockey now that ExtraSkater.com is gone. I am here to give you a very brief introduction to some sites, plus a further reminder of a few of the still perfectly useful ones I use a lot (especially during the offseason).

I don't know if either of the two newest sites will offer game logs the way Extra Skater did, which is certainly unfortunate. This won't stop most of us from getting the numbers (and getting them to you) still, but I'll get into that more as the season nears if there's a need to.

This site is monstrous and offers a lot of things to do. I'm still playing with all of it myself, to be honest. The biggest draw of the site thus far, aside from the presentation of possession numbers in percentages (like you may be used to from Extra Skater), is the hextally charts.

These charts are visualizations of shot locations and success rates based on the x-y shot location data provided by the NHL. The website has a thorough explanation about these charts, but thus far they have been very instructive in showing where teams are generating offense, how successful they are at defending at certain areas of the ice, etc. 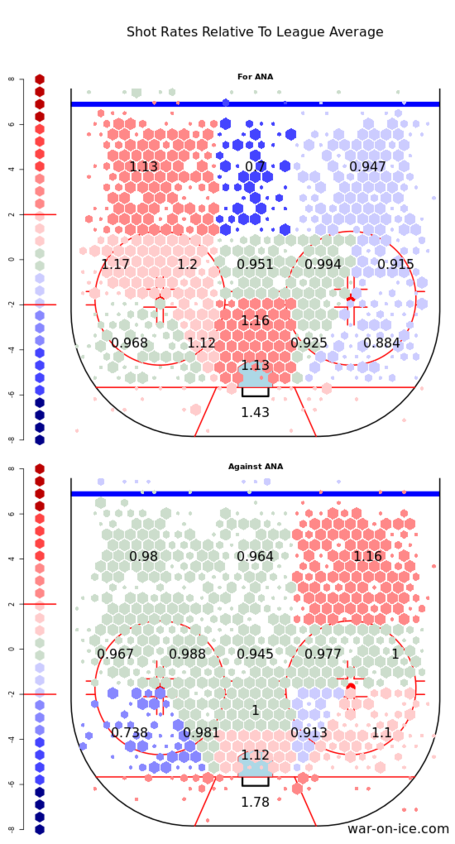 Go play on this site. The hextally charts can be sorted by shot type or game state. And like I said, the possession numbers are listed in percentages (nothing raw or complicated). There are a ton of search options and scenarios to create and view.

I've read a few places that this site intends to have game-to-game logs when the season starts, but we'll have to see.

This site, while perhaps not as intuitively interactive as war-on-ice, looks promising to me. For starters, Jen LC (formerly of 2nd City Hockey) is posting blog posts there, which makes it a potential destination for some thought-pieces. I have to wonder who else will begin publishing there? You need to realize: the push for using numbers in hockey has primarily been by independent bloggers and the like for years. A site hosting numbers and a place to publish think pieces is valuable to us still.

Similar to war-on-ice, the metrics presented on PH are fairly easy to wrap your head around, so it is easy to use. Percentages are again the currency, not raw numbers or +/- rates or whatever. The requisite (at this point) player specific and team specific data is all there. This is also true of war-on-ice.

Some really cool features on Progressive Hockey are the goalie stats (finally), the graph creator, and the WOWY numbers, which were previously a staple of Hockey Analysis. I like that someone is trying to put some meaningful data together for goalies, which is still a mystical area of voodoo for everyone.

The graph creator is, into and of itself, a potential blog post, but there's a ton of ways to chart data using it. It is all x-y axis stuff, but there's so many measurement choices that it is nonetheless interesting as a visualization. It is cool to go play with for those of you (like me) who are more visually inclined.

This is an older site but one I have probably visited the most consistently over time. This is where I do most of my work with the raw numbers. While there is a lot more information being presented, once you get the hang of how to find what you want, the site makes more sense.

HA is best known for its WOWY numbers, of course. The charts you see me drop into posts here are primarily fueled from here. But more than that, HA allows you to visualize its own data as well. (And hockeyanalysis.com is a blog worth reading, stats aside.)

I have to include this here even though it is not very user friendly to most. This is pretty much THE site though. You can find almost everything here, it just requires you to do some footwork.

Hockey Abstract is the name of the site run by Rob Vollman, who has also published a book the past two years under the same name. (I'll be dropping some reviews and thoughts on the 2014 Hockey Abstract soon.) There's a lot of cool stuff at the main site itself, but what is the gritty and clutchiest part of the site for me is the player usage charts. They are self explanatory really and are probably able to be made elsewhere by now, but this is where we've made them forever and ever. (Note: I always switch quality of competition to quality of teammate whenever I remember.)

While the hextally charts from war-on-ice provide a similar feature, I still find this to be a pretty cool site to play with. Whether it is creating heat maps (or shot dots) between players or teams over a season or a game, there's a lot you can do to make some cool visuals. This uses the same x-y shot data provided by the NHL but isn't relating it to shot rate differential (possession) so much as just showing what's going on. I refer to these quite a bit when focusing in on players specifically, even defensemen.

I might have left off some sites, but I wanted to just throw some links out there quickly for those of you wondering about what to use without Extra Skater. I can get into more detail about each if asked, and I'll certainly speak to anything I missed in the comments.