The Face of Goaling: Scoring Plays

This post shows how situational face-off wins can be beneficial for goals so long as you remind yourself that these successes still come off randomized, one-off plays.

Share All sharing options for: The Face of Goaling: Scoring Plays

While the hockey community is gradually moving away from using plus/minus as a meaningful measure, there is still a degree of false importance placed on face-offs and face-off wins. Face-off wins are obviously good things in that they are set-piece puck battles. Starting play with the puck (won puck battle) is easier than starting play trying to get it back (lost puck battle).

But cumulatively, face-off win percentage impacts win percentage very slightly. Starting play with the puck doesn't improve scoring chances or even team possession. Simply put: far more of the game takes place in "open play" than not, and face-offs are not part of that. They have a very limited window of effect on the game.

I thought it would be interesting to chart up some goals off face-offs or occurring within the window of the face-off's effect pre-open play. (I have included one that is an open play goal started off a draw for illustration's purposes.) Much of what these show us is that indeed, there's really no predictive repeatability in goal scoring off face-off wins. Likewise, there's no significant boost to overall possession, since only the first few touches off a clean draw are uncontested (and therefore controlled).

This first goal comes from a lost draw. Corey Perry forechecks off the face-off immediately and regains possession, which eventually turns into a brief cycle and goal. I started with this one precisely to show how winning or losing a face-off is a little less important than what happens after. This is just a turnover and won puck battle along the wall happening right after a (lost) face-off. On top of that, the power play is what allowed Perry to aggressive check the puck. 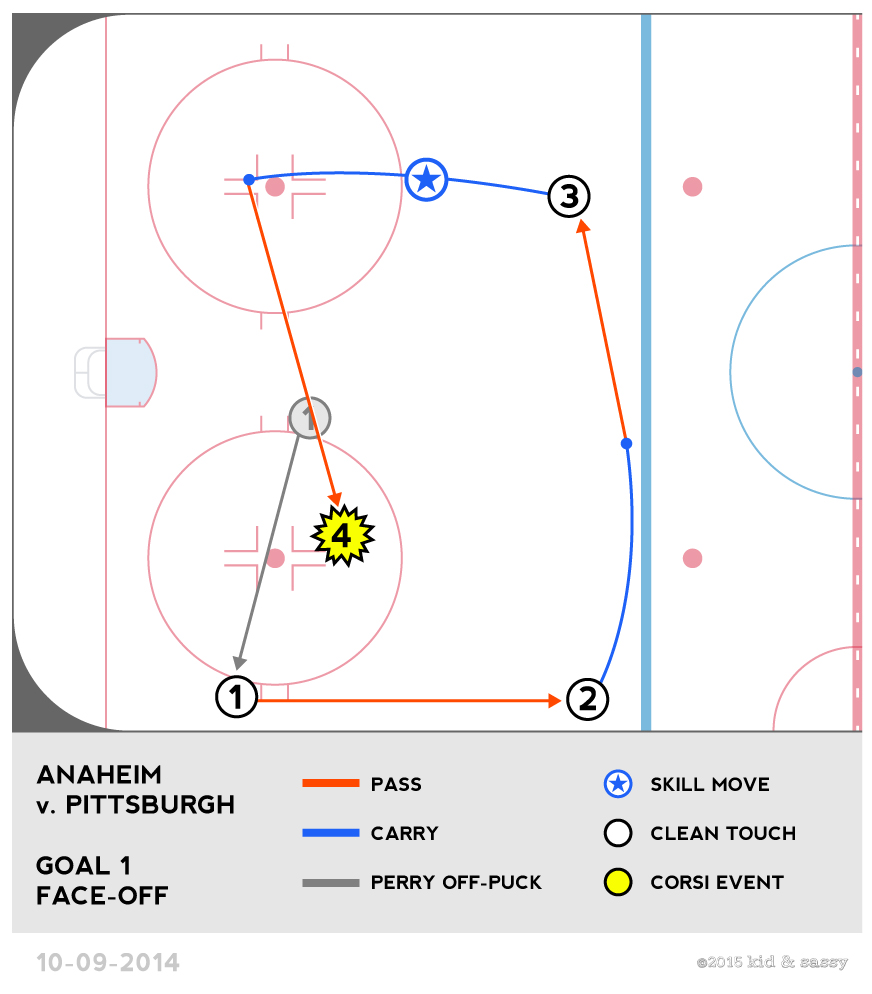 This is the classic clean face-off win and one-time shot. There are more than a few examples to choose from on this season, so I grabbed a Matt Beleskey goal. While the shot was perfect, note its location: just outside the scoring chance area. This is a traditionally low percentage shot. Due to that, the shot has to be perfect, and it has to be quick off the draw to work. But a goal isn't the normal result here, it is the exception.

And even then, it is a play that doesn't require a face-off to make work. Plenty of goals come from outside the slot area after being kicked out from down low, which an offensive zone draw technically is. Whether the pass comes from below the goal line or along the wall near the dots, the concept of kicking the puck out for a one-timer is pretty common. These plays tend to have around the same success rate, which is to say: low percentage. Hence why teams don't just put pucks deep, kick pucks out, and snap off one-time shots. 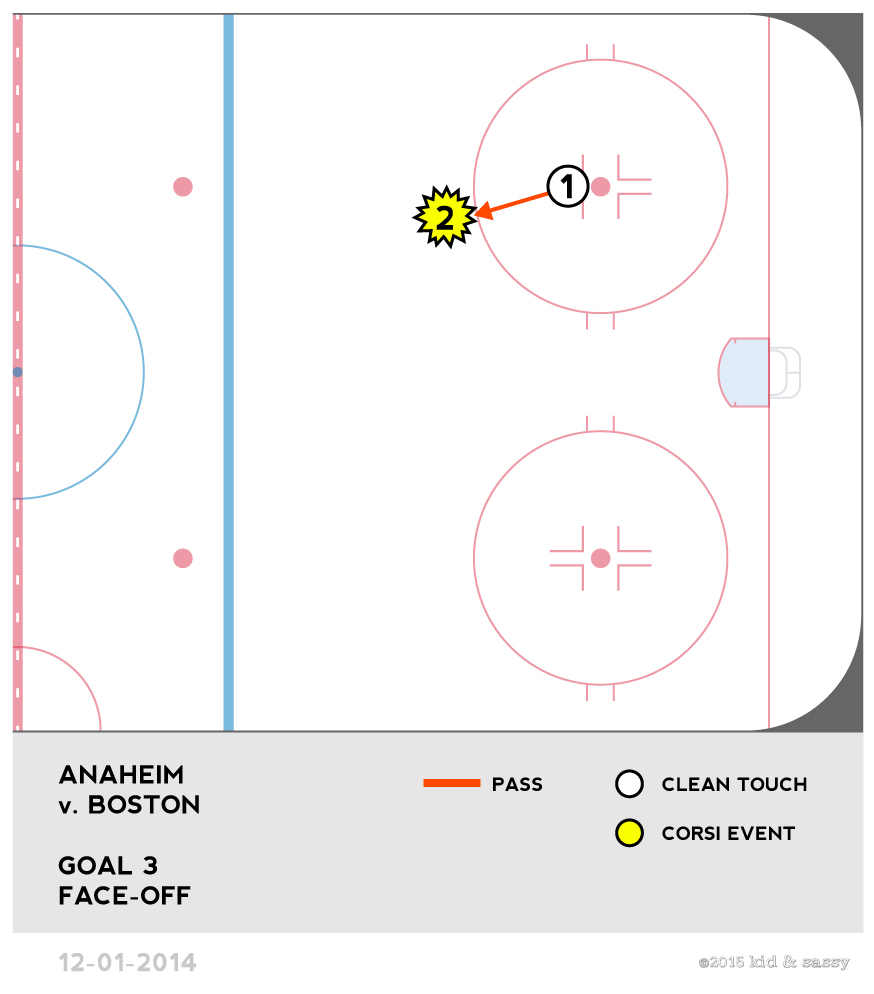 This is just multi-event goals off the face-off. In each of the following goals/charts, the puck is won back to the blue line for a low percentage shot. Predictably the shot is saved, but a desired outcome of the shot is achieved: a rebound! Much like taking (and expecting a goal from) the low percentage shot, a rebound is not automatic. Goaltenders may swallow the shot, or kick the puck into a corner, or make the save and have a defender clear it or regain possession. 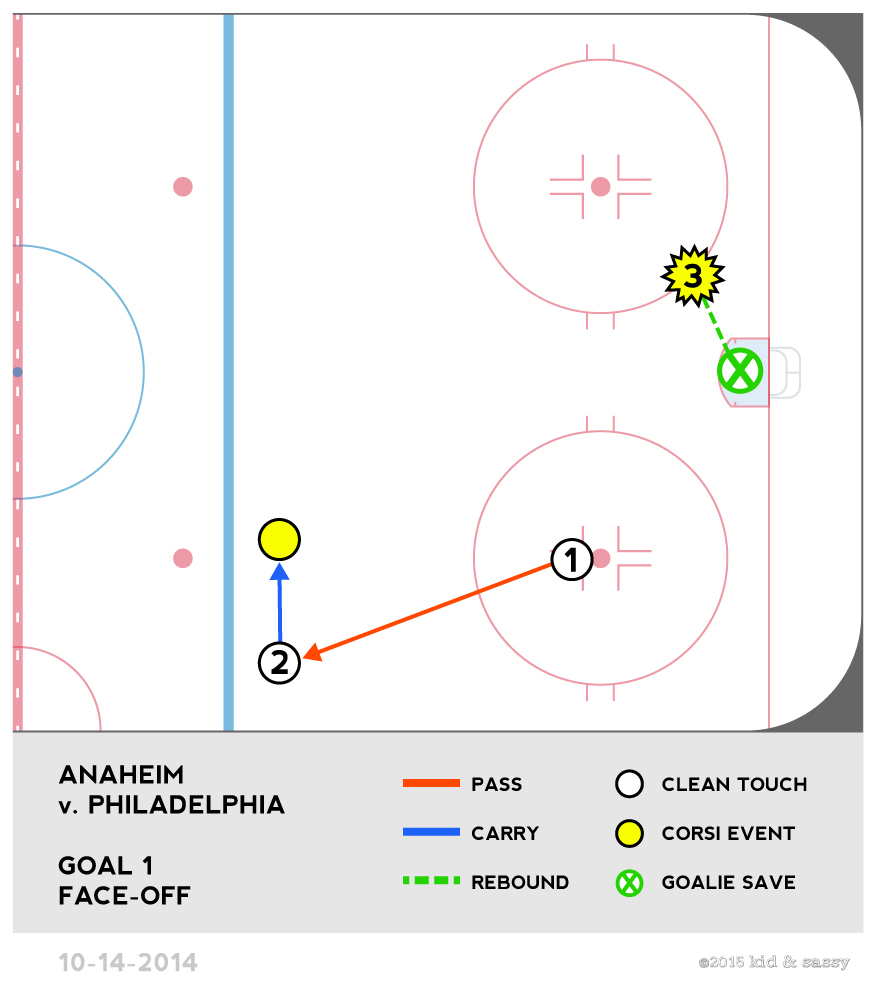 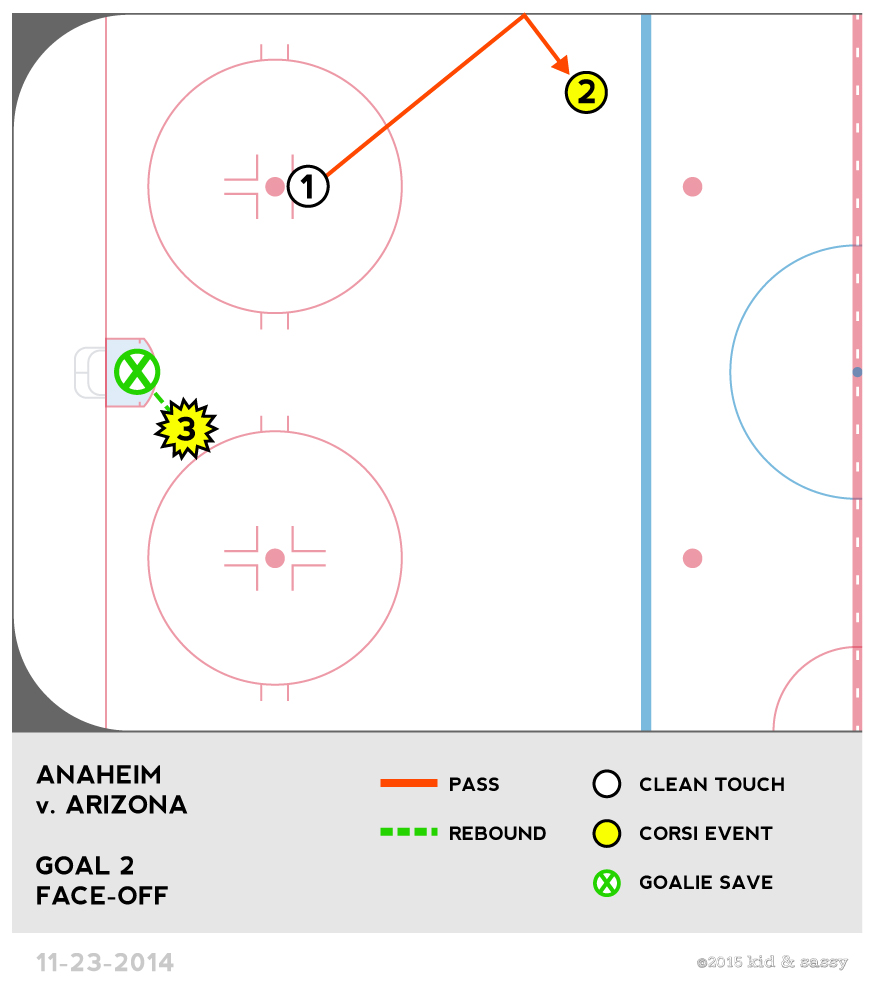 This is a higher percentage shot off the draw. The high slot still isn't the very best chance percentage, but it is better than shooting outside the dots. In this instance, the player collecting the puck off the face-off is allowed to walk into the middle without being checked. Most teams take that away by either checking the puck carrier or blocking the lane. 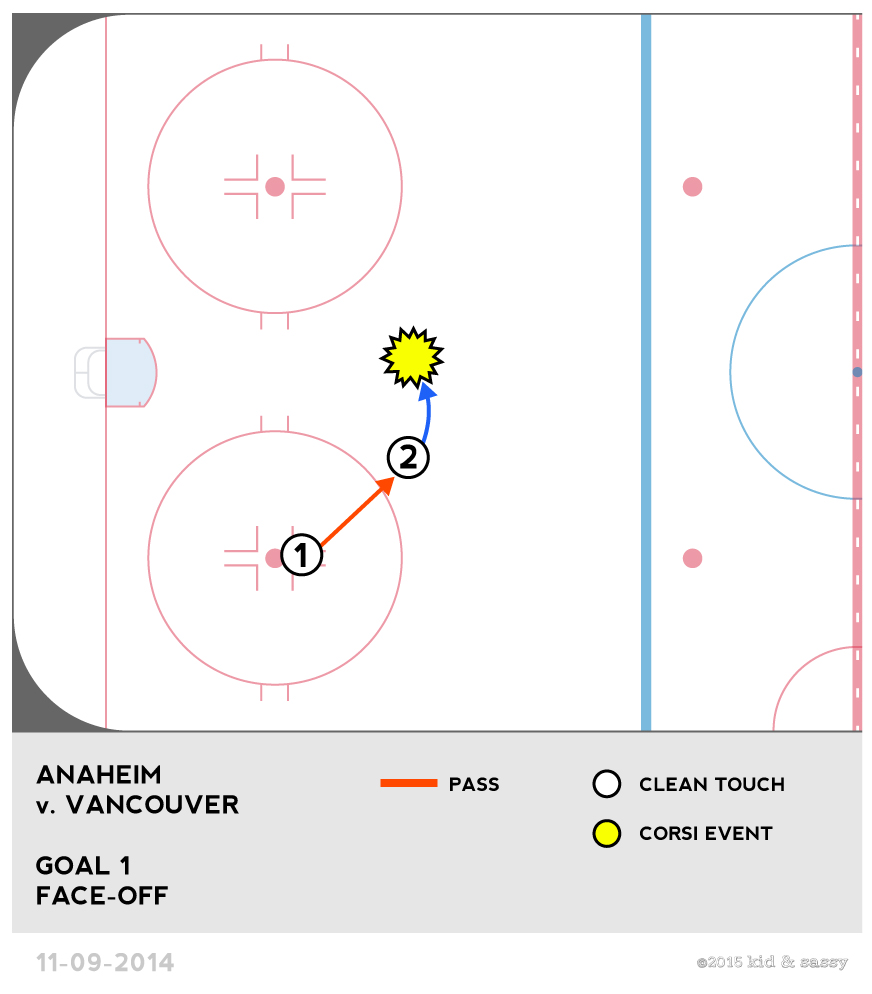 I don't know what else to call these goals but "quick plays," by which I mean goals resulting from face-offs but requiring open play puck movement. What differentiates these from true open play goals is that they are definitively helped by winning the puck nearer the net in the offensive zone. Much has to go right for the goal to happen, which is again why the face-off isn't directly responsible.

A chart, for you. 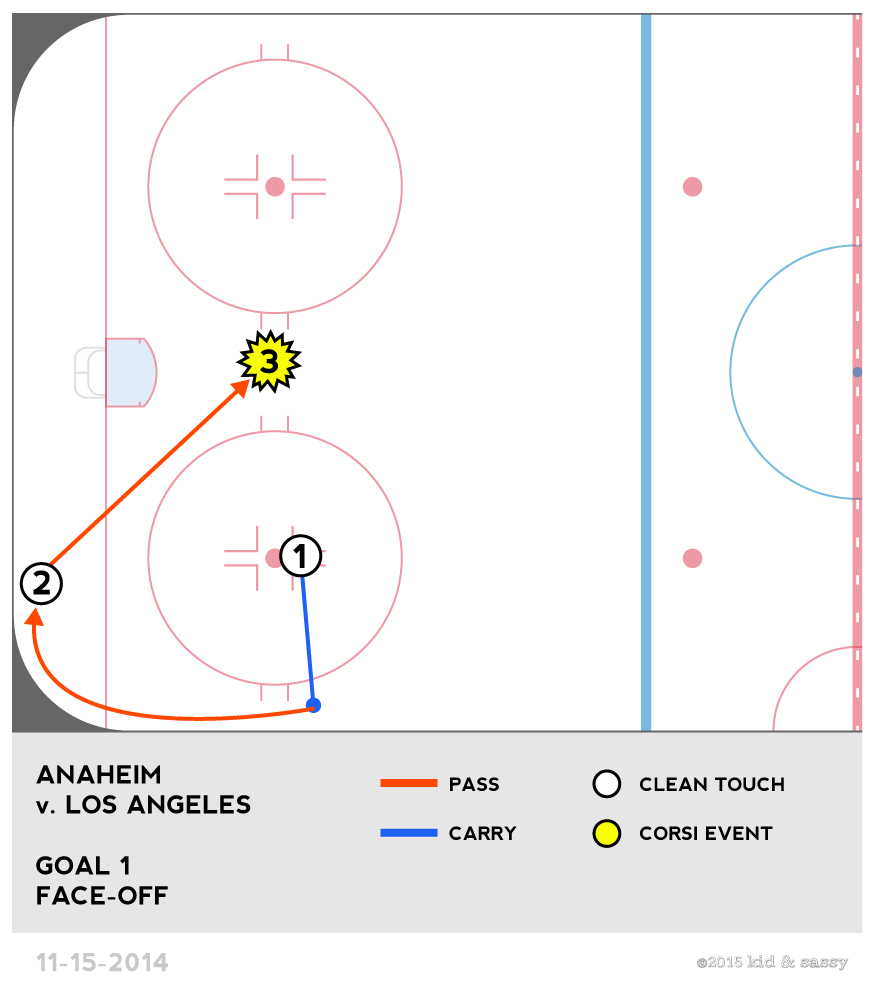 A key component of this play working out is Kyle Palmieri's positioning off the draw. Once play moves back to the blue line, Palmieri drives to the net and stations himself there. While Beleskey is the one who gets the deflection, Palmieri is there screening the goalie. Flames goalie Jonas Hiller never saw this shot/deflection. 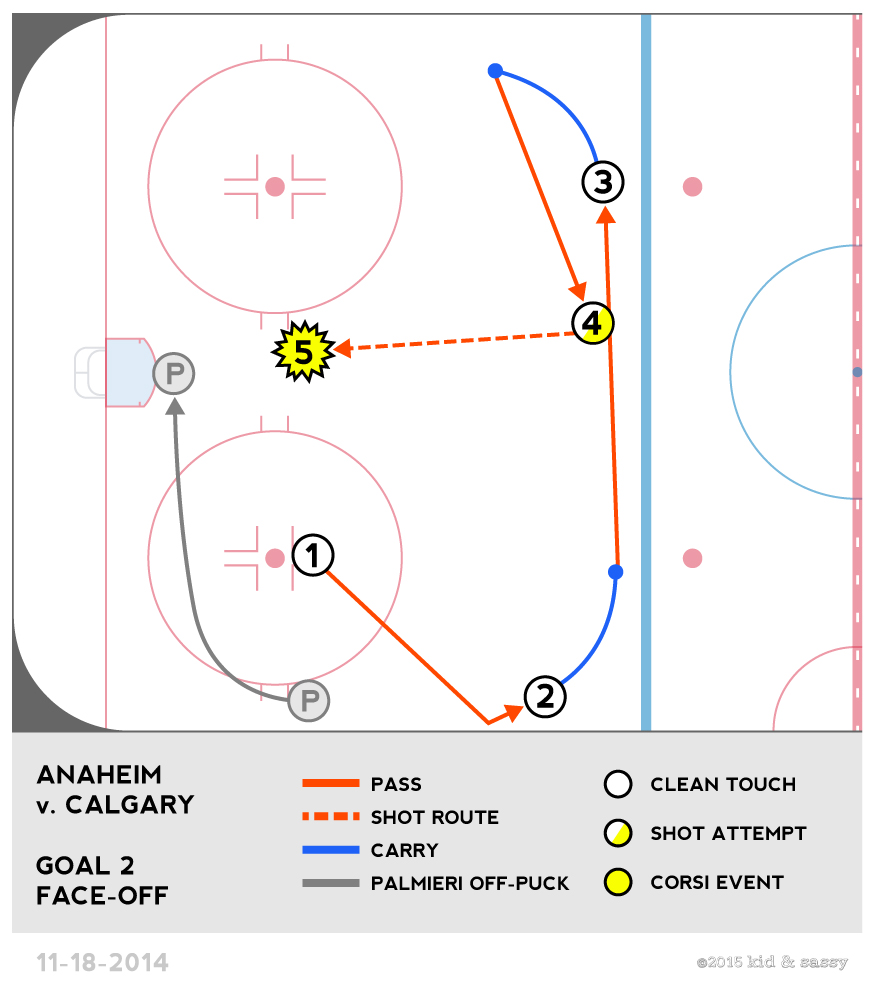 MISC. (Too lazy to spell the full word FTW)

This is the "a face-off occurred like two seconds ago and had nothing to do with the goal but there you go" bucket. It's a very lengthy title for a bucket, I admit. While the face-off is the puck battle that begins the possession, the goals themselves are the results of not-very face-offy things. In fairness to the time each occurred after a draw, I wanted to show them nonetheless.

The face-off certainly starts this play, but Vatanen finding Kyle Palmieri at the attacking blue line is a very skilled read by both guys. 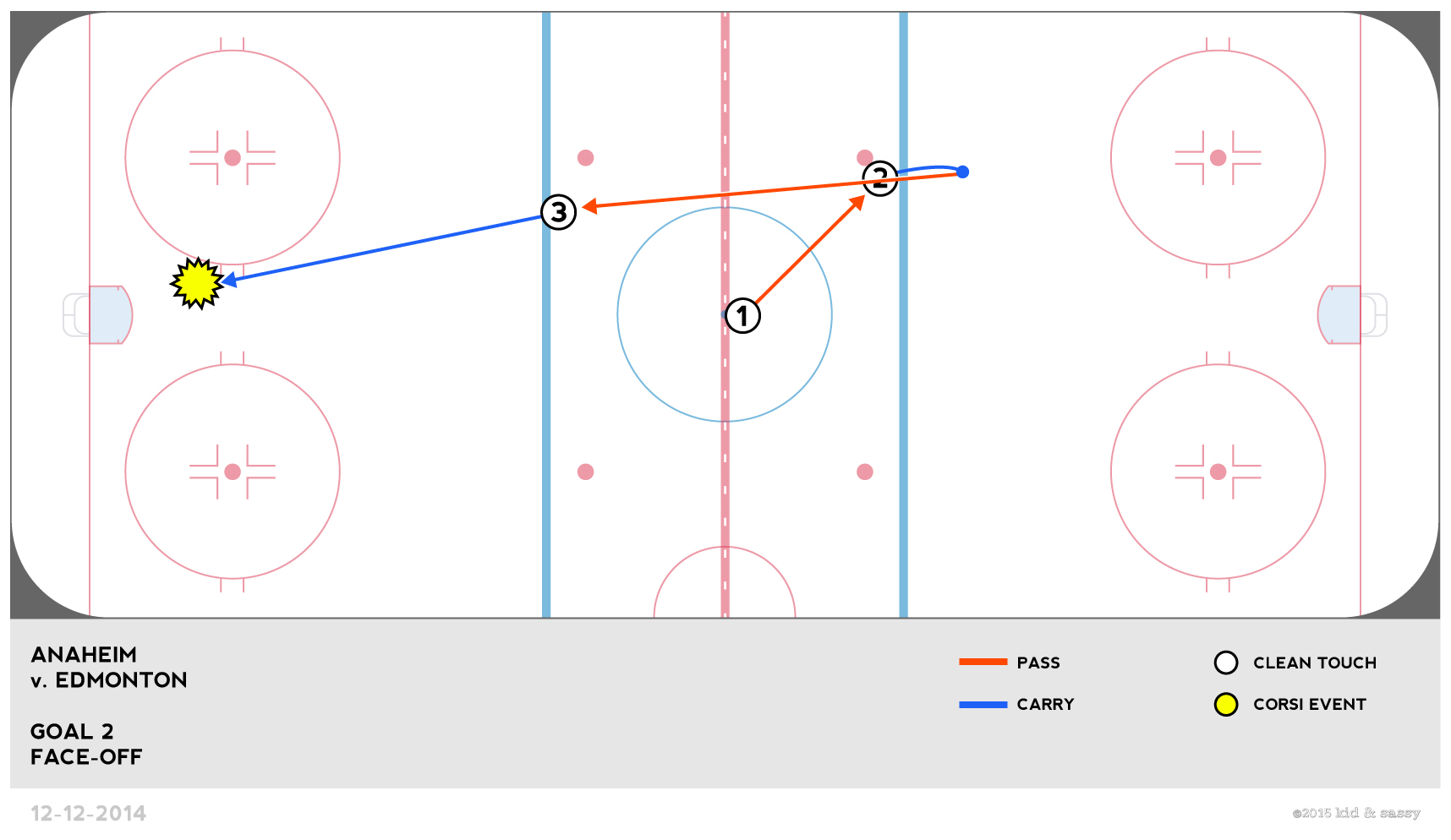 The won draw happens pre-highlight, so you'll have to trust me here. Getzlaf wins a defensive zone face-off, which is the absolute last place someone can expect a scoring play to result from really. Because the team is short-handed, Vatanen collects the puck and simply clears it down the ice. The goalie bobbling the puck before an indecisive handoff leads to a turnover and goal. You can see why I included it here: it is a turnover/forechecking goal that couldn't have occurred without a face-off win at the other end. 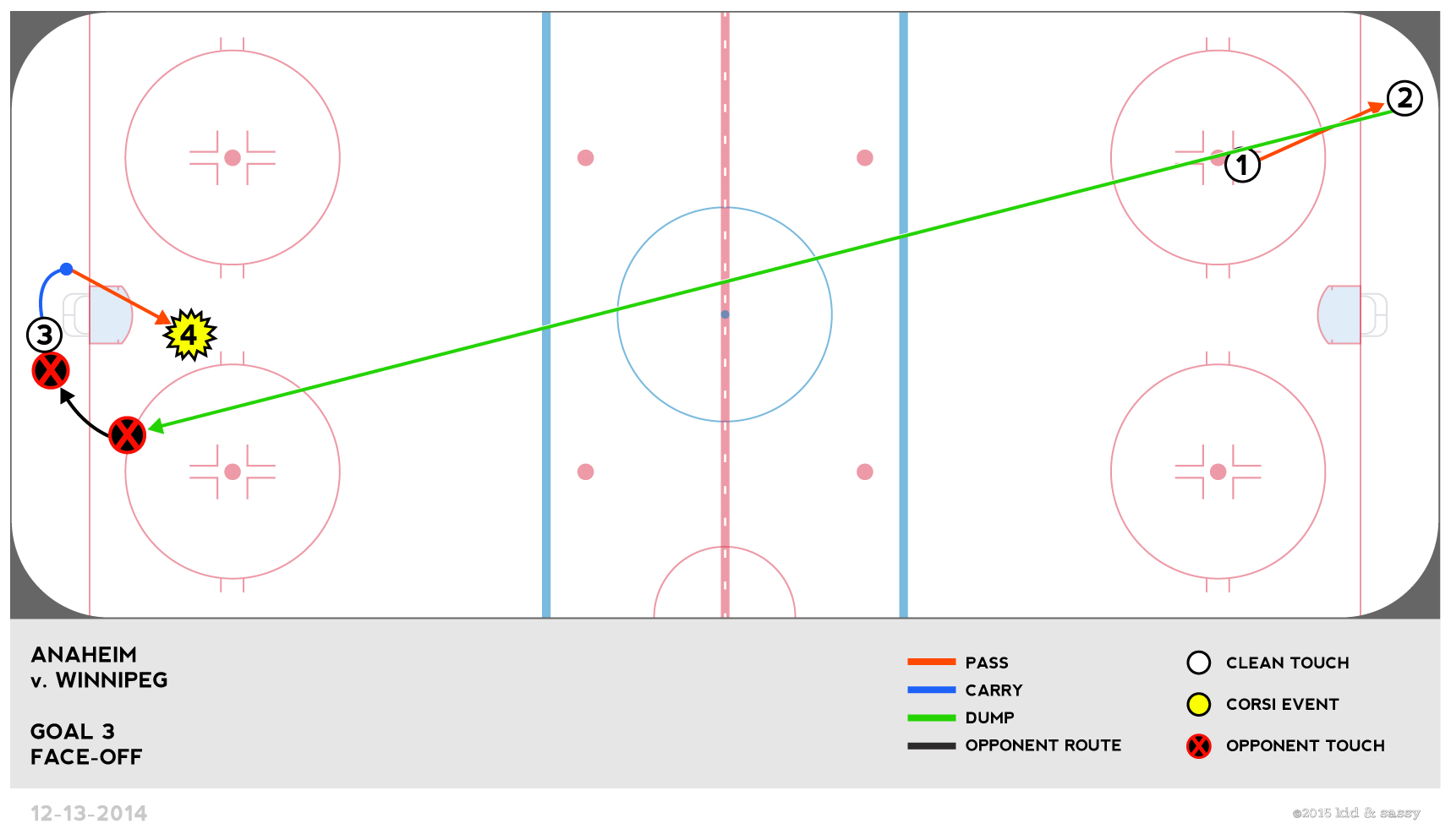 This is an example of an open play goal resulting from the puck starting in the offensive zone. Once the first shot is attempted on the fourth touch, enough time has elapsed to allow all players to properly position to defend the play and not any set piece off the draw.

This play has two distinct luck components to it beyond the face-off, which wasn't cleanly won. The first is Andrew Cogliano's recovery of the puck off his shot attempt. It's an unpredictable bit of excellent fortune that the puck didn't bounce away from him, allowing him to collect it back and continue his progress on attack. The second is Cogliano's pass into the middle, which the goalie doesn't stop or redirect away from Jakob Silfverberg.

This continues the theme of how many things have to go absolutely right for a goal to be scored. A face-off win is only one part of it. In this instance, it isn't even a very good descriptor of the center's work on the play, since both Silfverberg and Cogliano assisted in its win. 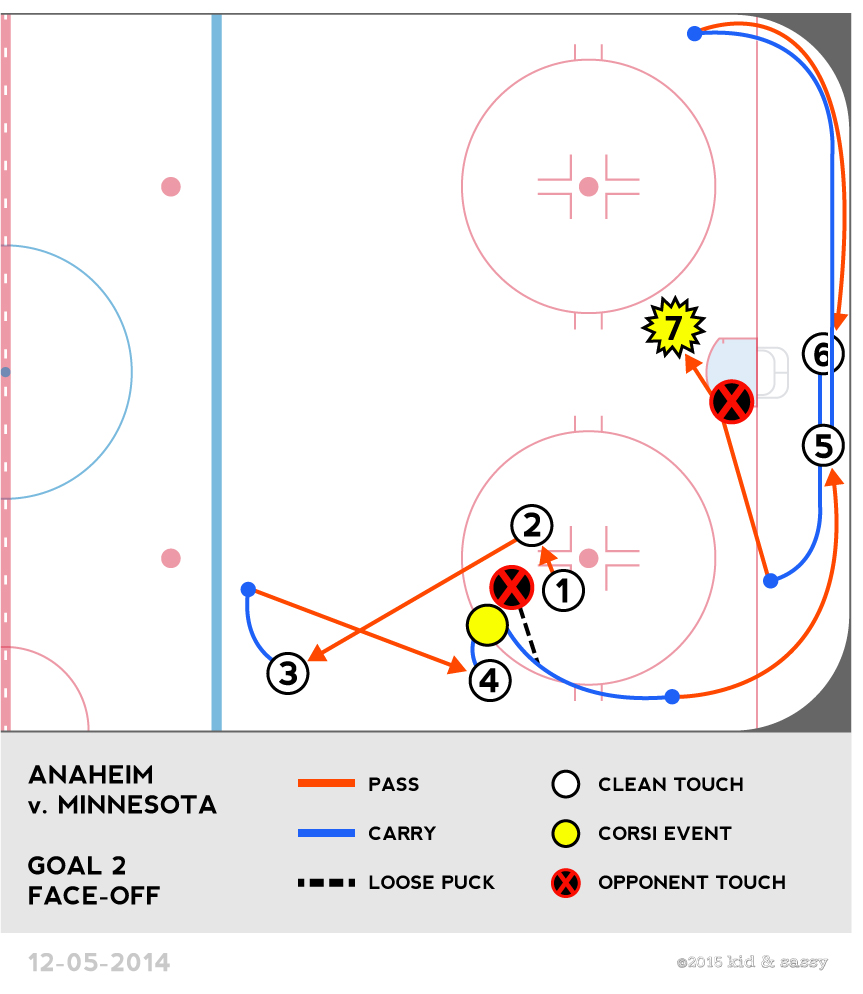