Ducks/Jets Game 1 Preview: It's On.

The Ducks and Jets are the last two teams to begin their 2015 postseason, but it happens in just a few short hours.

Share All sharing options for: Ducks/Jets Game 1 Preview: It's On.

Does the clock ever tick slower than on a playoff gameday?  It doesn't seem like it, so let's get right to the previewing.

What we learned from the last game:

I guess that depends on what you  mean by the last game.  The last game overall, Saturday at Arizona... probably not a whole lot other than who the Ducks would be playing tonight.  They played a solid game with a lineup fairly representative of what we'll see here in the playoffs (with a few exceptions that we'll get to in a minute).  However, it wasn't exactly a measuring stick game, considering Arizona ended up with the second worst record in the league.

The last home game... well, that was an unmitigated disaster against Dallas.  Not to mention, that was also the last time the Ducks played a game with four days off beforehand.  Of course, we can always soften the blow by saying Bruce Boudreau rested Ryan Getzlaf in that game which throws everything out of whack.

What that season series recap doesn't show you is how badly the Ducks were out possessed by Winnipeg in those games.  Below is a chart from datarink.com that shows how each Duck matched up against each Jet in the season series.  Under the chart is a legend of how to read it, and you can get even more detail by clicking this link, but the long and short of it is, blue is bad for the Ducks. 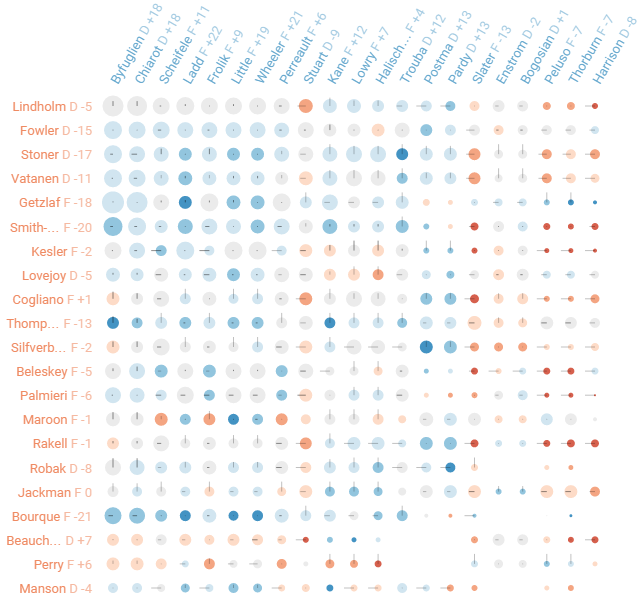 A lot has changed since then for both teams, especially with some significant trades.  On Winnipeg, Evander Kane and Zach Bogosian have made way for Drew Stafford and Tyler Myers as well as adding Lee Stempniak and Jiri Tlusty, and of course we all know about the trade deadline shakeup the Ducks went through to bring in Jiri Sekac, Tomas Fleischmann, Simon Despres and James Wisniewski.  Also mitigating that chart above, is the fact that the Ducks have been the third best shot attempt team since the trade deadline and the two teams above (Dallas and Los Angeles) them didn't make the playoffs.  So perhaps the matchups are a little bit different now than they were back in December and January.

If you mean the last playoff game.... yeahhhhhh.... let's just not talk about that.

What needs to change from the last game:

What I'm trying to say with all of that is, it's really difficult to see how this game is going to go.  The Ducks haven't played a really meaningful game in a long time, and the Jets have played nothing but.  Anaheim's results and methods have fluctuated a lot in that time, but that's what makes it so fun/stressfull.  Now is when it really counts and they have to put it all together.

What we do know about this series is that it's going to be tough.  In the past two years, there has only been one game between Anaheim and Winnipeg that was decided by more than one goal.  The Jets have a good combination of size and skill from guys like Blake Wheeler and former Duck Mathieu Perreault to behemoths like Dustin Byfuglien and Tyler Myers.  They also have production throughout the lineup with seven players scoring over 40 points this season, as compared to the Ducks' three.

Those last two points are what remind me so much of last season's first round series with Dallas, which was brutal.  So brutal in fact that, despite never trailing in that series, some people at The Hockey News think that the Ducks almost lost.  Also, if memory serves, there was a rash of people picking Dallas to upset the number one seeded Ducks last year.  That seems to be the case again, but upon further inspection, which you'll see in our next post today, that's mainly a vocal Canadian minority.

One difference between the Dallas and Winnipeg series is in playoff experience, even though most of the Jets haven't seen postseason action.  Yes, Tyler Seguin had won a cup with Boston, but Winnipeg boasts three Cup champions from Chicago in Byfuglien, captain Andrew Ladd (both in 2010) and Michael Frolik (2013).  Byfuglien, in particular was a much bigger part of the 'Hawks (literally and figuratively) than Seguin was for the Bruins as well.  With 16 points in 22 games he was an absolute force to be reckoned with, though he was playing as a forward at the time.  This will be his (as well as Ladd and Frolik's) first trip back to the playoffs since the Cup winning season.

The bottom line is, that was an intense series against a good young team, with some weaknesses to exploit.  This promises to be the same, so let's get it started already.

Per the Ducks' practice report yesterday, neither John Gibson nor Nate Thompson skated with the team, both due to upper body injuries.  Boudreau hinted that Gibson is "getting closer" after he worked out with goalie coach Dwayne Roloson, indicating that perhaps it's not a particularly serious injury (magumbo alert) but clearly Frederik Andersen will start and be backed up by Jason LaBarbera.  Also, expect Chris Wagner to stay in the lineup for Thompson, speaking of which here are the line rushes from yesterday's practice:

And the D pairings thanks to the enterprising Jake Rudoph on twitter.

Also per Shohara, Wiz skated with Korbinian Holzer, and we all know what that means, press box popcorn pairing.

I generally like those lines.  As for the bottom six, I would expect Fleichmann and Emerson Etem to be the odd men out, in favor of Andrew Cogliano and Tim Jackman.  Specifically, I imagine that Boudreau and Murray want Jackman in to counteract the size and physicality of some of the Winnipeg players.  Another option is moving Fleischmann down into Cakes' spot, but I think the former scenario allows for a little more in-game flexibility, which Bruce is certainly a fan of.

As for Clayton Stoner over Wiz, I think our boy Eric the Hawk had it right on twitter this afternoon, saying that it's basically one of those chemistry things.  Stoner has played with Sami Vatanen pretty much all year (with varying results, depending on the level of brain cramp-itude) while Wiz never really got settled with anyone.  And that's not necessarily a fault of his own as Bruce rested and shuffled the lineup a lot in the past few weeks.

On the Winnipeg side, Perreault is considered a game time decision, after having left the second to last game of the season with a lower body injury and missing out on the final game and all practices since.  Tobias Enstrom didn't skate with the Jets yesterday either, but there is nothing to that other than a particular rest schedule that head coach Paul Maurice likes to keep apparently.

Put all your money on Ondrej Pavelec to start, as he hasn't given up a goal in his last three games (despite losing in a shootout to Colorado on Thursday).  Via Dailyfaceoff.com (last updated Tuesday, April 14) the Jets' lines and D pairs look like this.

Teemu Selanne will be referenced at least 57 times across the various broadcasts, despite the fact that he only played for one of these teams.  #AtlantaThrashers