The third game was by far the most entertaining and most contested of the series thus far.

The Winnipeg Jets brought the closest to its very best game against the Anaheim Ducks in game three. But two games of depressed PDO bounced the other way like a rubber band in the third game, and wow. The depth on the Ducks roster is finally showing up, and showing up big.

Before I show charts from game three specifically, I put together some trend lines for the three games:

PDO is easy and obvious, so no need to explain it much. Like I mentioned, the Ducks percentages jumped up massively in game three after being below average in the first two. The CF (shot attempts for) and CA (shot attempts against) trend lines are rates. In game one, the Ducks generated a lot while suppressing an equal lot. In game two, Winnipeg pushed back and closed the gap some. In game three, Anaheim didn't generate nearly as much as in the previous games, but its suppression trend wasn't all that far off from game two.

In short: the Jets disrupted a lot more shot attempts in game three but the Ducks were also respectable in this facet of play. Fortunately, Anaheim's below average shooting percentage climbed dramatically to make up for the drop-off in raw shot generation.

Now for the game three specific charts and the like. I'm going back to Hockey Stats for this one:

The Jets continue to surprise me. Winnipeg's third period was probably its strongest of any in the series overall. It was also the first period of the game in which the team stopped leaving coverage to make huge hits. Both teams were admittedly going out of their way to hit in the first two periods. According to many, the Jets felt it had to be more physical to play better.

This chart backs up what we saw last night. While Winnipeg's hit-everything strategy did disrupt Anaheim's flow (established in the first two games), it also disrupted its own attack. When both teams were more or less back to trying to win the game and not maim each other, the Jets actually carried a little bit more play. 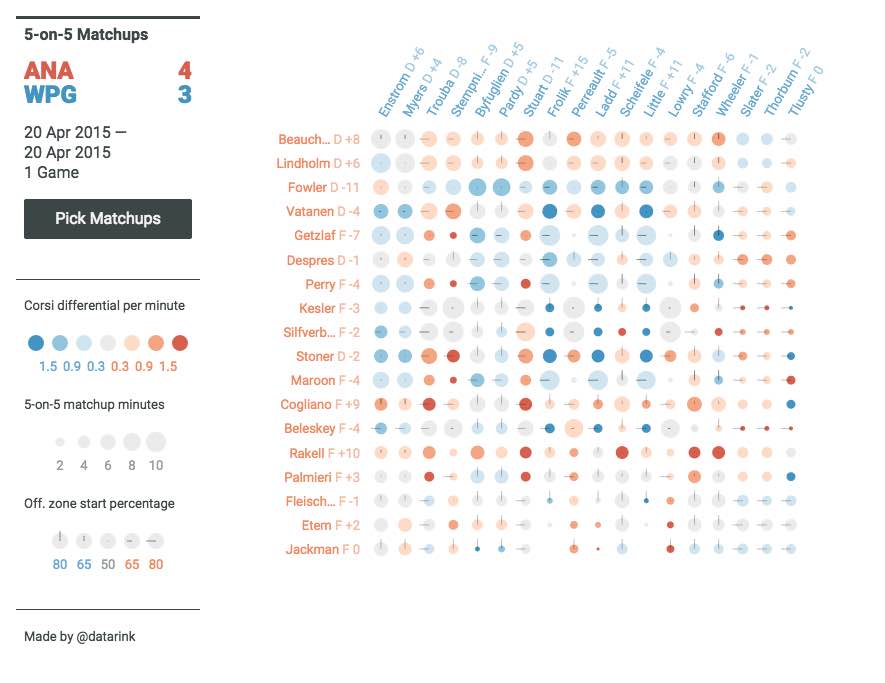 Look at Rickard Rakell, just look at him. He owned every match up last night.

Here is the even strength and all situation TOI: