The Ducks played a satisfying game one against the Flames.

Game one was an outstanding win by the Anaheim Ducks over the Calgary Flames. The Ducks chased Jonas Hiller, Canada's favorite narrative in this series already, and dropped even more goals on Karri Ramo. All in all, the final result felt good, more than anything.

But I am here to slow your roll, Ducks fans. Sure, the result was tremendous. But you know what? The Flames didn't actually play that poorly, systemically. Calgary attacked far more than I thought Anaheim would allow, which is something to keep an eye on in this series. Even with some players hurt, the Flames generated more than its season history would suggest. Still not better than the Ducks, but it's still something.

Where Calgary failed wasn't in being completely out-possessed to a horrific extent, it was in its loose defense. There were some blown coverages, missed assignments, and questionable reads on gaps both in transition and off the cycle that Anaheim exploited. (Much of that exploitation was by design, so credit the Ducks for executing.)

Here's the shot attempts chart at even strength, from Hockey Stats: 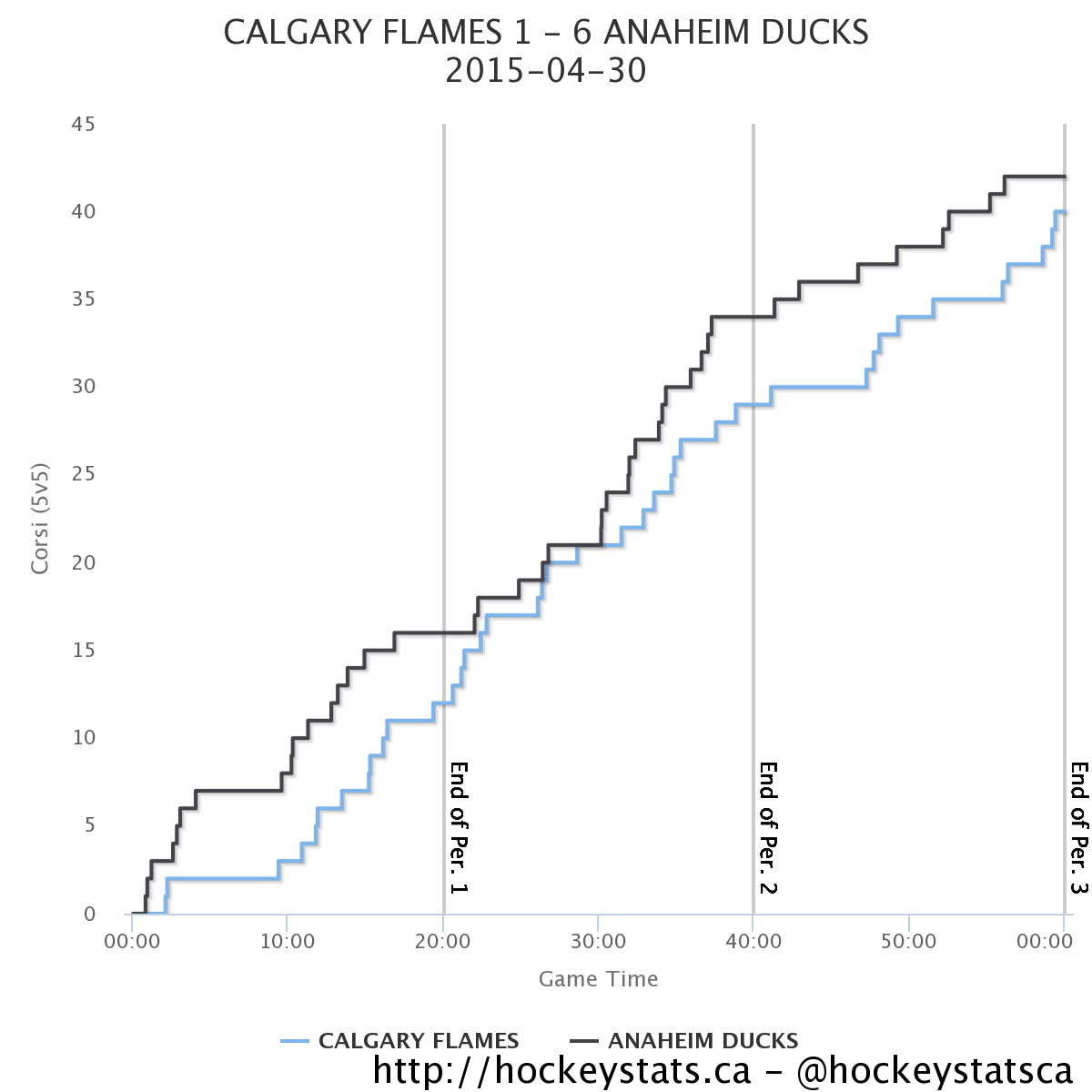 Given the Flames season rates, I was surprised it hung around as closely with the Ducks as it did. Adjusting for score would reveal quite a bit more gap, as Calgary should have pushed harder when trailing. Again, credit to Anaheim on not sitting back too hard - a concern we all had going into this round.

But I could see an effort like this from the Flames turn into another result easily enough. The Ducks need to continue pushing hard every game and not fall victim to series effects.

Here is the excellent datarink chart: 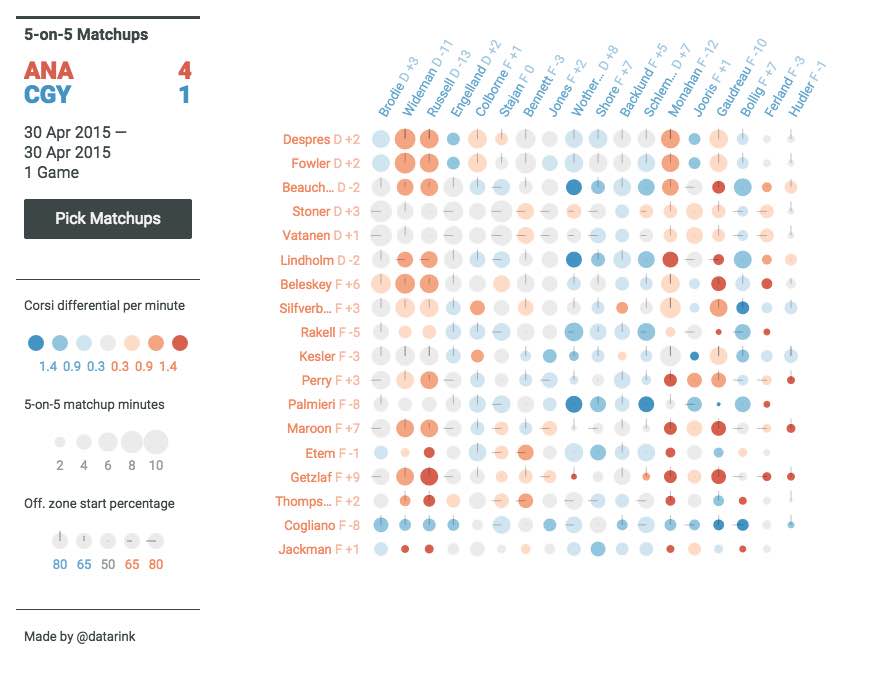 There's not nearly enough orange in this chart. Anaheim was able to get on top of Winnipeg much easier than it did Calgary in game one. The Flames have some fight in it, which will continue throughout the series.

Here's the TOI charts, both for even strength and all situations. I highlighted the defensemen in a different shade to make finding them easier. With a game like this first one, in which the Ducks jumped out to an early lead, seeing how Boudreau deployed his players tells us lots! 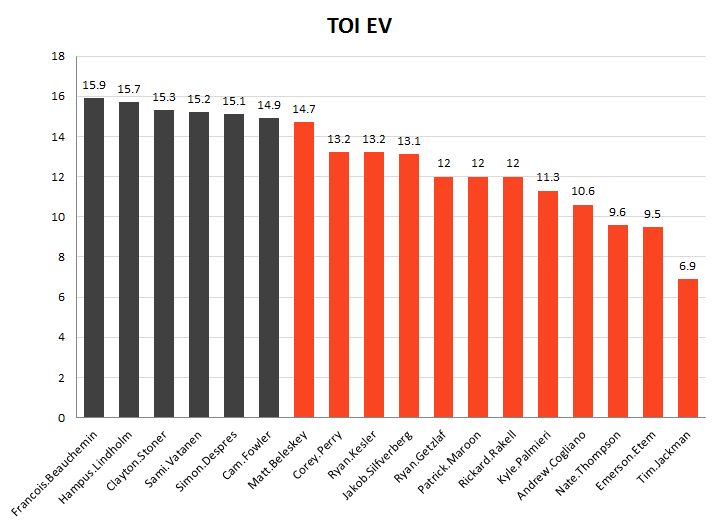 The very good news: Boudreau continued using Thompon as a fourth line center at even strength, despite holding onto a lead. (Which is a good reason the Ducks didn't lose it.) 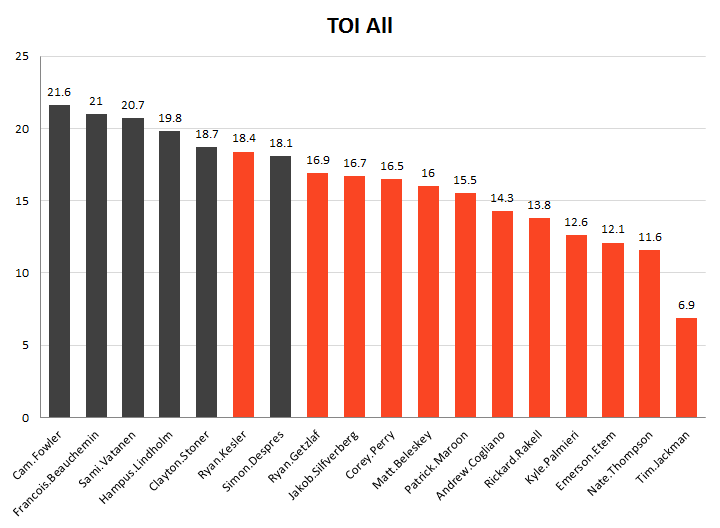 This is even more encouraging: with the game more or less decided by the midway point of the second period, Boudreau eased off on Ryan Getzlaf's minutes. Ryan Kesler played the top minutes among centers, and Rickard Rakell was still given more time in the game than Nate Thompson.

Boudreau managed his bench well in game one, I must say.