The Ducks have regained the home ice advantage in the series.

The Anaheim Ducks and Chicago Blackhawks participated in a pretty solid slogfest in game three - hardly surprising after one of the best triple ovetime games in NHL history. But you know, for fans of each team, game three was an intense and tightly checked affair that was a nail-biter until the very end of the game. Yikes! Yet at this stage of the playoffs, winning games is more important than anything else.

Let's jump right in to the visuals. Here's the even strength event chart from Hockey Stats: 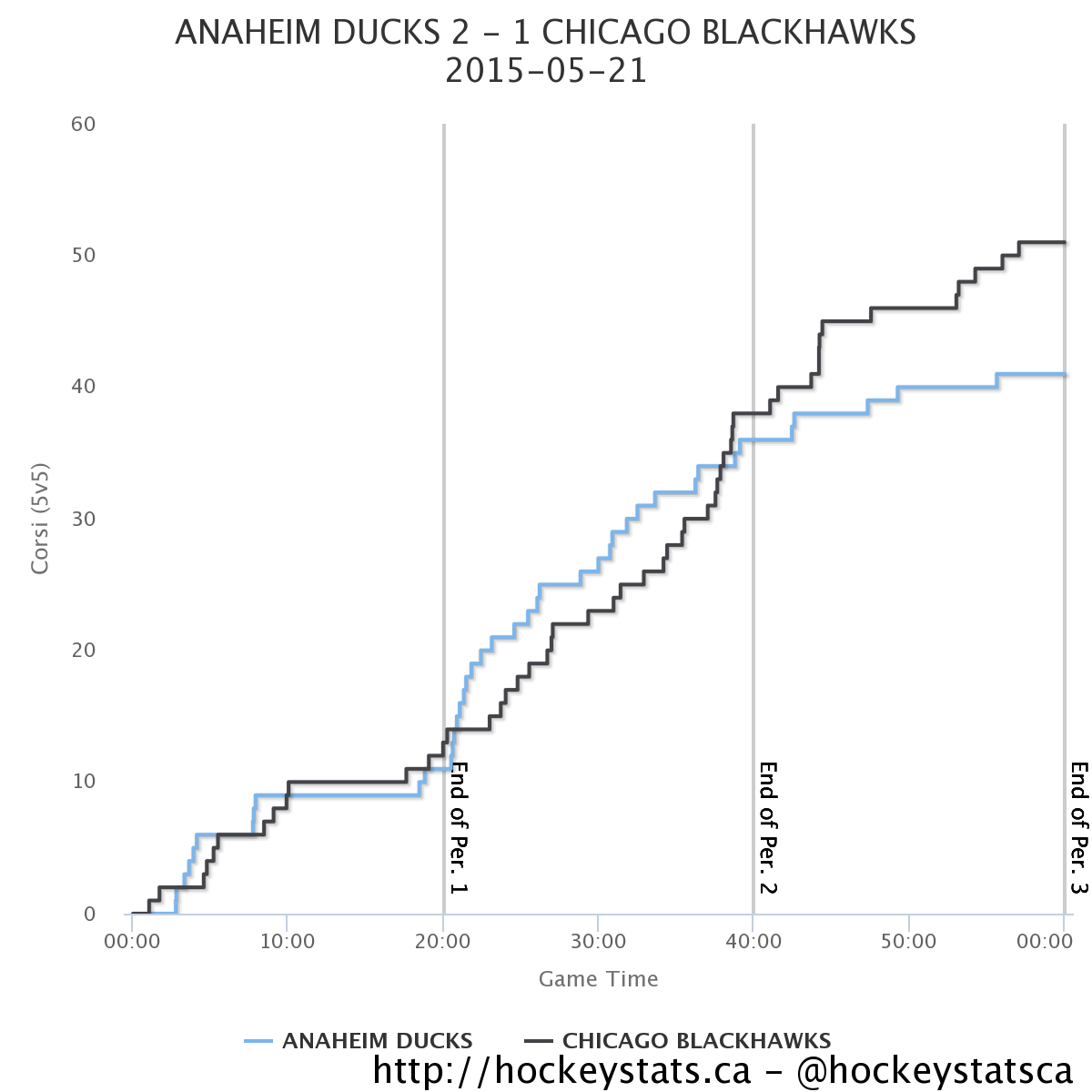 Remember when we were all afraid of this team's performances in the second period? The first part of the period was the Ducks best stretch of play against the Hawks in this series, all told. Eventually, Chicago clawed its way back into the game, but the result of the flow of play allowed Anaheim to strike for the final time in the game. The third period was predictably spent defending the one goal lead.

Here is where I say that is a bad and risky way to play...except in this game, the Ducks were actually outright better at defending interior shots (until the third) than at any point in the playoffs, sans maybe game five against the Calgary Flames. Here's one of the few instances when comparing all the events with just the unblocked events can pull out a lot more context: 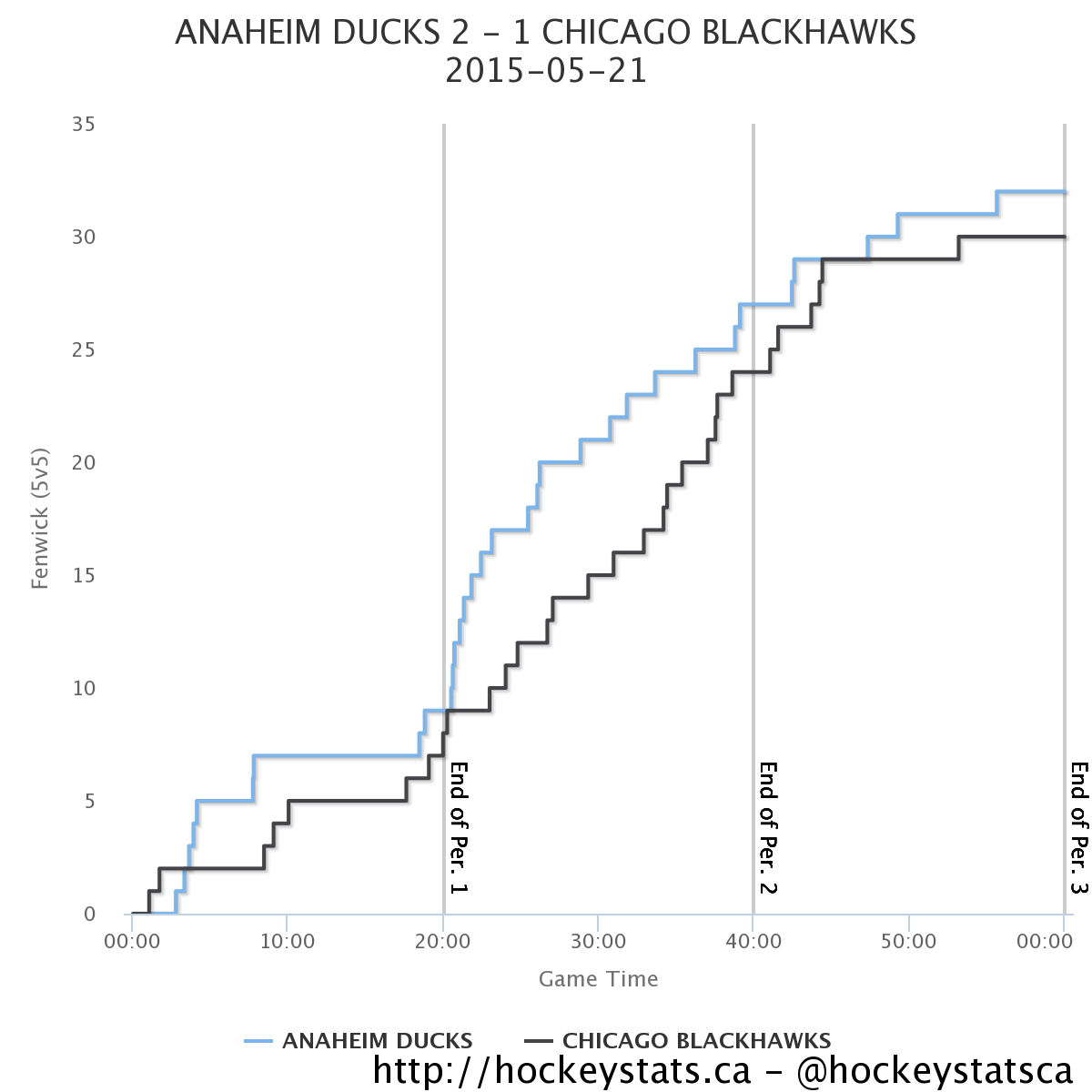 The Hawks had a very difficult time getting shots through the Ducks lanes. Anaheim has blocked shots to various degrees of success all season, and this was one of the team's better performances. In addition to blocking out everything, the Ducks were denying the slot well and clearing out any rebounds with much better success than in game two. As such, when play turned the other way, Anaheim was able to get more attempts toward Corey Crawford than Chicago did on Frederik Andersen.

In bigger samples, all attempts (corsi) has proven to be more significant a measure of goals for/against than unblocked attempts (fenwick). In small samples - especially in single games - the differences between all and unblocked events can mean very specific things. In this game, the Ducks ability to stay in front of the Hawks attack made a difference. (It may not always work out this way.)

Here is the head to head chart from datarink: 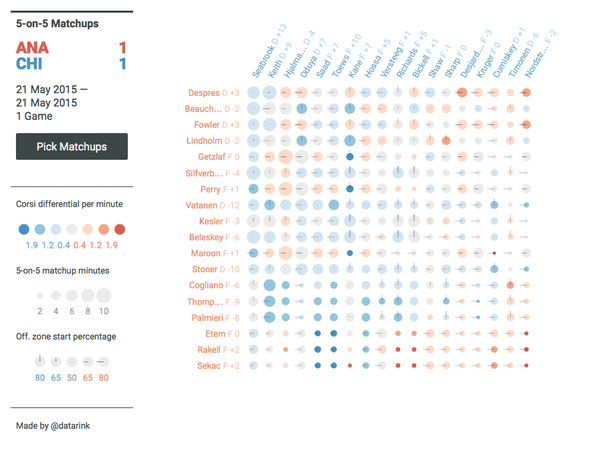 There's a lot of blue there (signifying Chicago's attempts advantage) in large part because of that third period. But I want to call out the limited success of the Ducks fourth line against most the Hawks roster (obviously not against the opposing top line). I also want to call out and drool over the performance of Simon Despres and Cam Fowler, who most of you know is my preference for top pairing (when played together).

I want to include this shift chart (from datarink) in here because it is fun. It is still in the experimental phase, but I think it's a neat way to see how the above chart comes about: 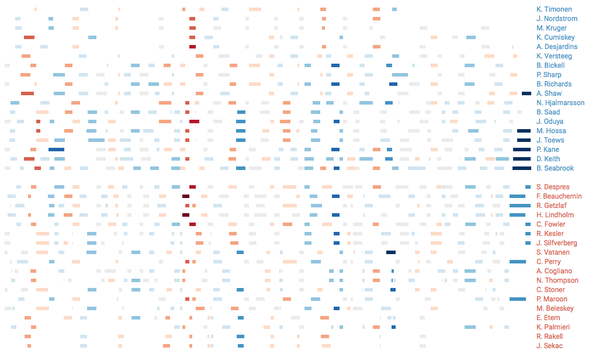 There's no time marks or other helpers here (yet), but this is a "corsi shift chart." The Ducks lineup is arrange from highest TOI on down, while the Hawks lineup above it is mirrored: highest TOI on up. This groups the events in the center a bit better. Like the head to head chart above, the colors tell us which team was taking the shot attempts with each line on the ice. See, fun! And see how it shows the third tilted more heavily toward the Hawks.

Here's the TOI charts at even strength and all situations: 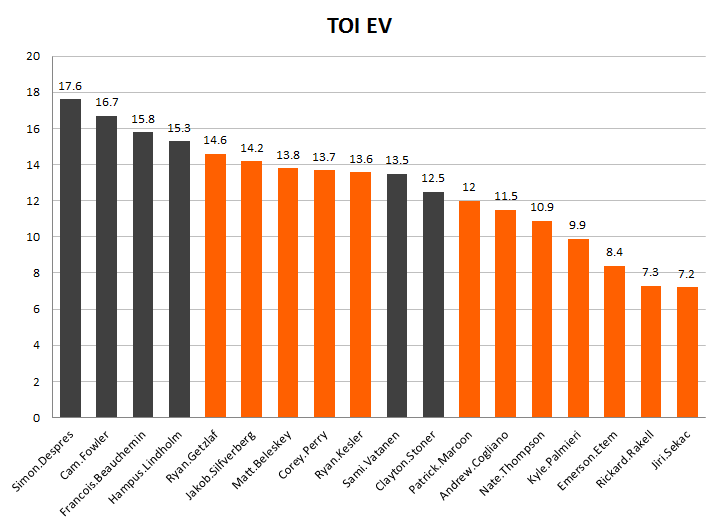 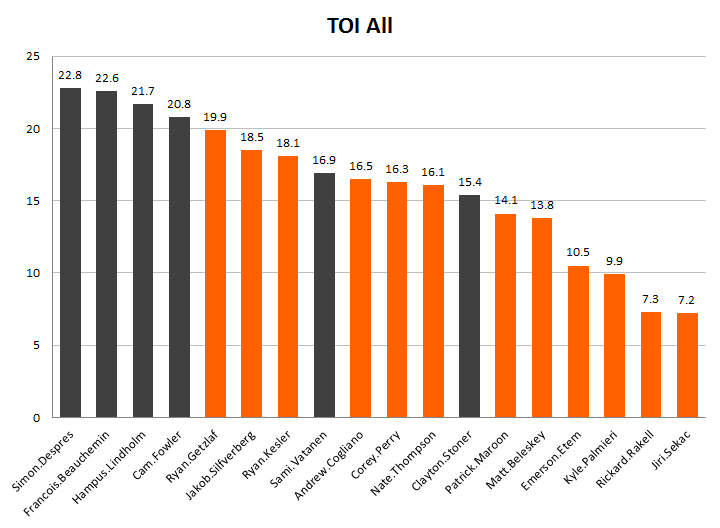 I tried a different orange here, let me know what you think.

Despres-Fowler were the top pair at even strength. Given that the team was defending more than anything in the third, it limited the minutes of the bottom six and pairing players - but that's fine with me. The all situation minutes continue to astound me in that Jakob Silfverberg is once again one of Boudreau's most relied upon forwards. And that's wonderful, because he's been an underrated player since he's arrived.

Not anymore. What a coming out party for him in this postseason. Hilariously, game three was probably his "worst" through the three rounds, and he wasn't even that bad.