At least Anaheim didn't give this one away so much as just never gave itself a chance.

For the second consecutive game, the Anaheim Ducks allowed the Chicago Blackhawks to do whatever it wanted in the second period. Unlike in game five, the team couldn't rebound from it and claim victory. Now the Ducks are headed home in an elimination game when it had a chance to clench on the road - eerily similar to, oh, the last two game seven scenarios Anaheim has faced.

I will attempt one positive before getting into anything else: the Ducks have played stretches of utterly dominant hockey in this series. The third period was another stretch of that with unfortunate results. This Anaheim squad is deeper than in previous seasons, when those unfortunate game sevens occurred. This is the year the trend can and should break - it will be up to the players to maximize their game and minimize the stupid errors from game six.

And on each of the second period goals against, one player made a bad error. In each case there are perhaps forgivable circumstances, but a couple of these are egregious and can't happen at this stage.

On the first goal against, Ryan Getzlaf and Patrick Maroon have successfully forced the puck back into the Chicago end. Getzlaf becomes the first forechecker and checks to the puck, with Maroon dropping back to cover the wall. The Hawks players begin to rotate (and I believe make a change) on the ice to create space, and the play appears locked up. Getzlaf backs off and he and Maroon align in a high box - this seals the boards and forces play into the middle, where the third Ducks forward should be.

This was not the case. Corey Perry drifted toward the wall to check Jonathan Toews. The defense needs to read that, because it is probably the preferred play given the personnel - nobody leaves Toews unmarked. For some reason, Francois Beauchemin decided it was the perfect time to pinch into the middle in Perry's place. For...reasons? (There's literally no gain to be had by doing it.) The result is Beauchemin trying to intercept a stretch pass in the center of the ice to Patrick Kane, and younger and better player, who made a skilled tip to spring Brandon Saad inside and into a breakaway.

With Getzlaf as the first forechecker, he's got to concern himself with the puck carrier more than the breakout - his trailing forward and defense are there to cover it. So Saad cutting under his forecheck isn't really his problem. But Perry and Beauchemin crossed up coverages when Frankie decided to be a hero instead of dropping to cover his designated side of the ice with the game tied. That's the important part here: a tied game is never the game state to take huge risks.

Hampus Lindholm had no chance to get across to his partner's side and catch the speedy Saad.

On the second goal against, Simon Despres gives Duncan Keith too much space to make a play. The fourth line had been out too long, so the Ducks were mid-change - Emerson Etem and Jiri Sekac had gone off for Matt Beleskey and Kyle Palmieri. The play is covered fine until Despres commits himself to shot blocking when Keith initially winds up by dropping to a knee and, once the first shot is faked, doesn't get up and close the gap (to force a play on the puck under pressure). Instead he stayed down for the second shot fake (you can see Palmieri pushing him toward Keith to close the space - the correct play), which allowed Keith to pick his head up and find Marion Hossa at the far post. Cam Fowler gave him no space and it was a skilled finish through his triangle in zero space.

Nonetheless, Despres didn't man his gap properly earlier in the play, and Fowler didn't have much of a chance on the shot.

The third goal is perhaps the easiest to break down. This was a failed clear by Clayton Stoner, who has a remarkably high number of broken up zone exits (shocking, right?), but was otherwise covered properly. Ryan Kesler came up top to pressure the keeping defender - against Chicago, this is a strong strategy because the team generates a lot of shots from the point - assuming his wingers would cover the overload on that side.

All Beleskey had to do here was stay goal-side and manage his gap. Instead, when Kane received the puck and turned toward him, Matt "opened" his stance to face the attacker directly - the result of which planted both skates on the ice. By opening up this way, he stopped moving his skates, which was the opening Kane was looking for before cutting outside and into the stick check and making Beleskey look foolish. The Ducks player can't recover because he opened his stance instead of kept his body between the attacker and the goal, removing any momentum from his coverage.

Beleskey was literally caught standing still when Kane blew by him. The right winger in this play, Palmieri, could have checked toward the middle sooner. But for one thing, Palmieri isn't a defensive minded player; another thing: if he cheats to center too soon and Kane kicks a pass out to the point, the ensuing wide open point shot is on him.

Defense in hockey is a team affair. When one player breaks down, another has to help out - but if you get two or three guys "chasing" a play, the entire zone breaks down into chaos. One of the reasons the Blackhawks are so successful is because the team varies its attack. There's a lot of point shot threat with Keith and Brent Seabrook out there, which spreads defensive zone coverages to account for them. When one player misses his check on the inside, there's generally more space for Chicago's snipers to work.

The sloppy, poor individual defensive play needs to be mitigated in game seven. 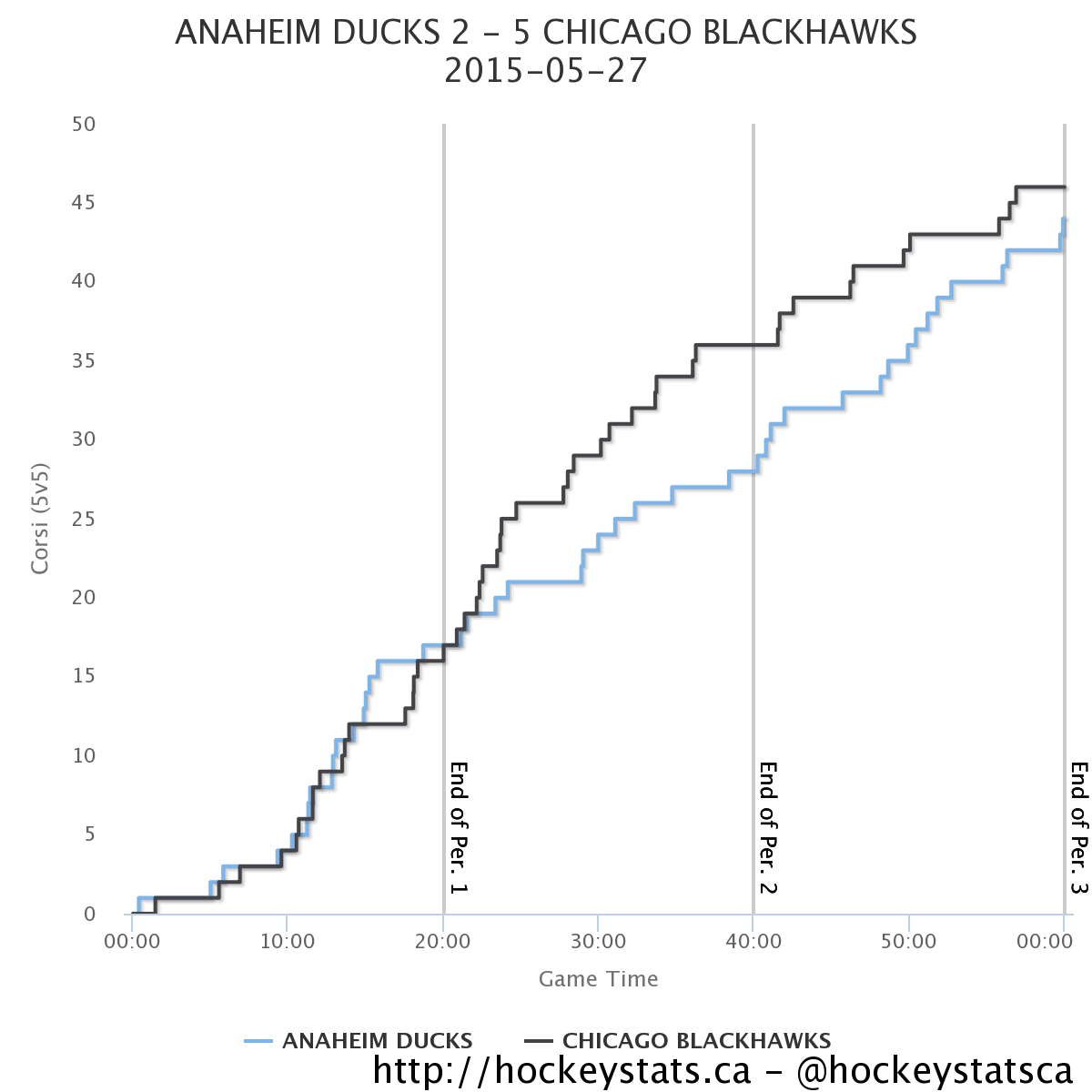 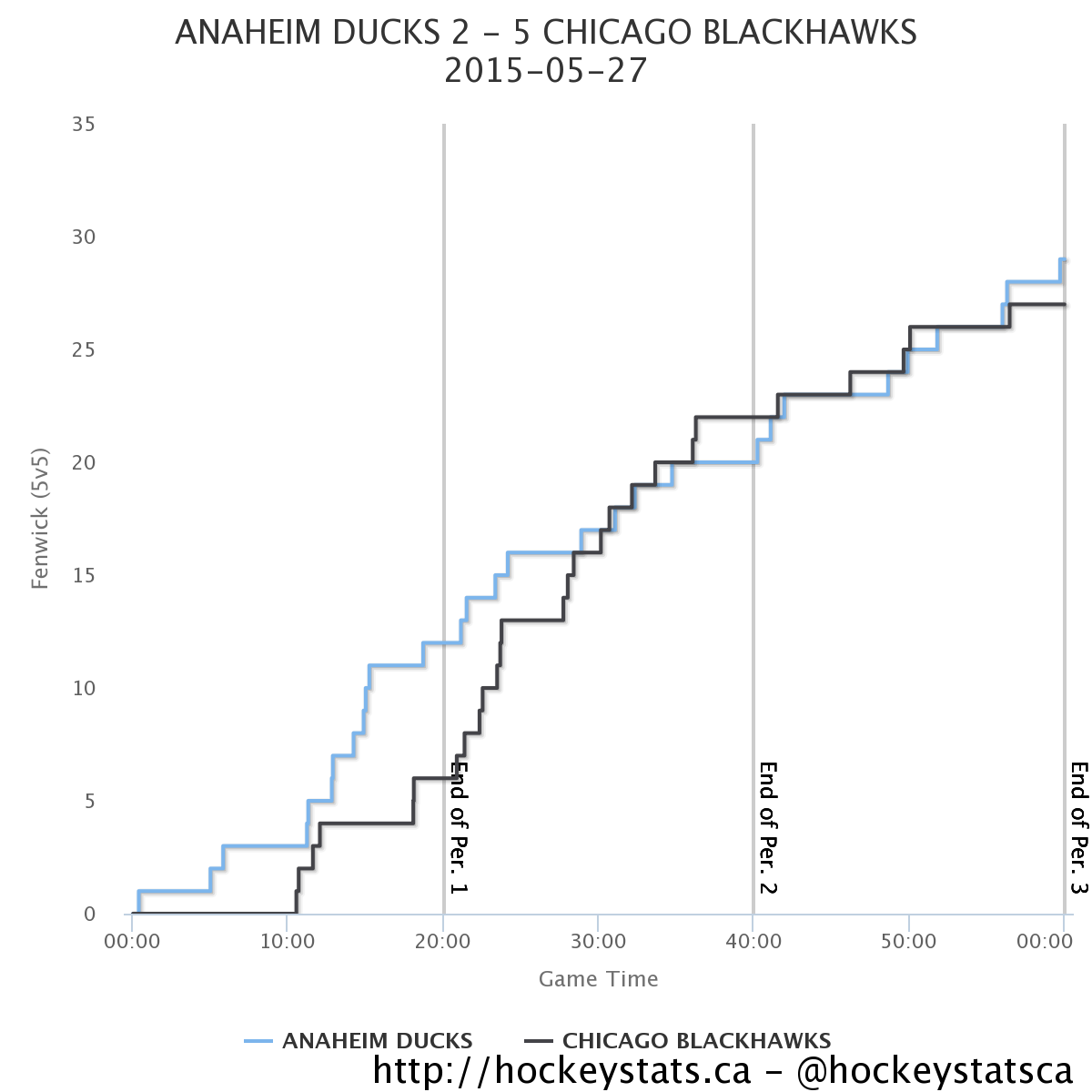 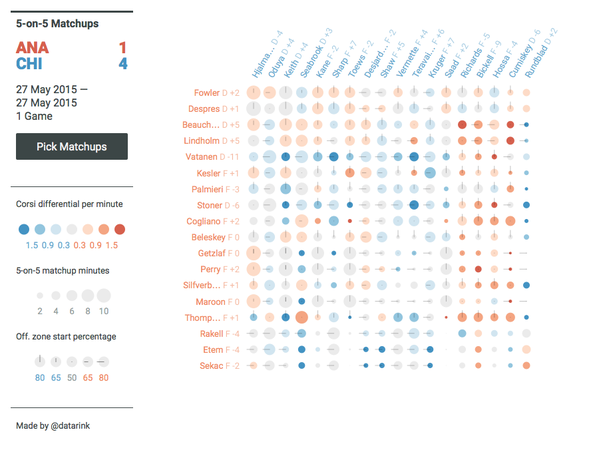 Score effects and a very strong third period influenced a lot of this. Initially, the pairing of Beauchemin and Lindholm against Toews looks positive. It is the defensive matchup Boudreau has been trying for as much as he does on his pairings. It is a matchup Quenneville has welcome at home because Toews keeps winning it - Boudreau might want to stop doing it! 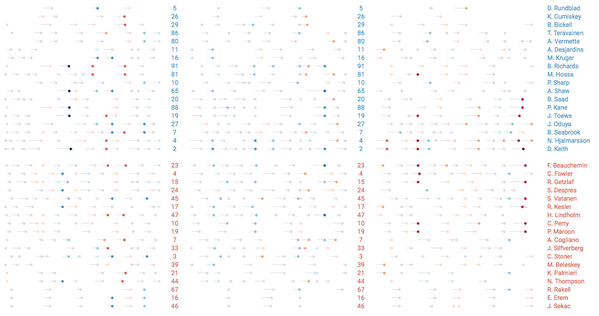 That second period was all Blackhawks. As I mentioned above, it was the Beauchemin-Lindholm pairing that got victimized the most - although each of the three goals against came against a different pairing.

By the end of the third, Anaheim had made a serious push that helped its end-game readings here. But ultimately, the defensive breakdowns that gave Frederik Andersen little chance on the first three goals against ruin what was otherwise a steady performance for him. It makes the real goals totals over the goals expected imply a poor performance by him, which is unfair.

The TOI charts, even strength and all: 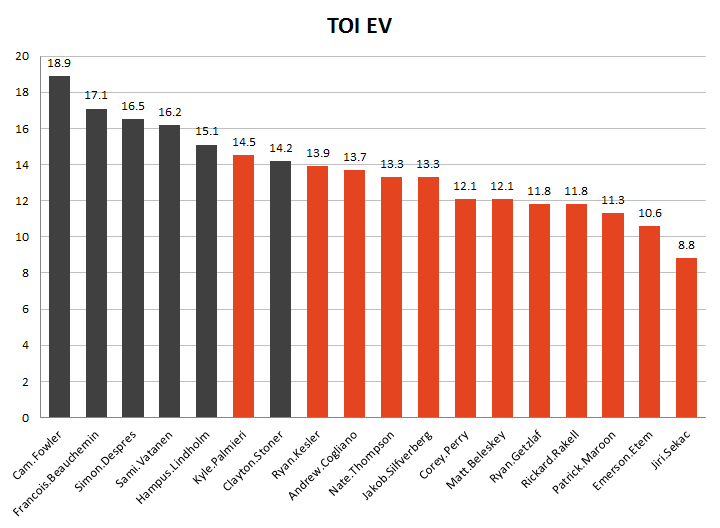 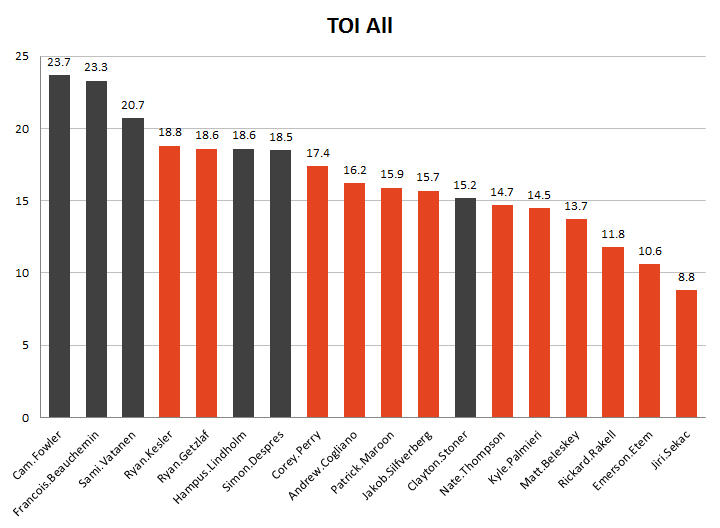 I went back to the previous orange here.

This is the sort of game that forces us to question whether Boudreau limiting the confidence and play of his younger players on the fourth line was the best strategy. It was a "safe" one. But like Teuvo Teravainen in Chicago, more involvement throughout the playoffs may see players like Rickard Rakell and Etem playing with incredible confidence and trying things on par with their respective skill.

There was one shift following a penalty kill, I believe, or at least due to changes on the fly, in which Rakell set up Perry and Maroon with a glorious chance in the second. (It may have been the third.) We as fans know the skillset is there, but the infrequent usage and expectation on that fourth line has really limited its play.

Ultimately, the Blackhawks best players have been better the past few games than the Ducks best players. That needs to reverse in game seven if Anaheim wants to avoid its two-year strong tradition.