This game was more indicative of what I thought game one would be.

Although the Anaheim Ducks once again beat the Calgary Flames in the second straight game, this one played out the way I thought the entire series would. The Flames have been posting better numbers in the postseason. But the Ducks have been as well. It is still going to be a good series - two more games is a long way from done.

Here's the shot attempts chart at 5v5 from Hockey Stats: 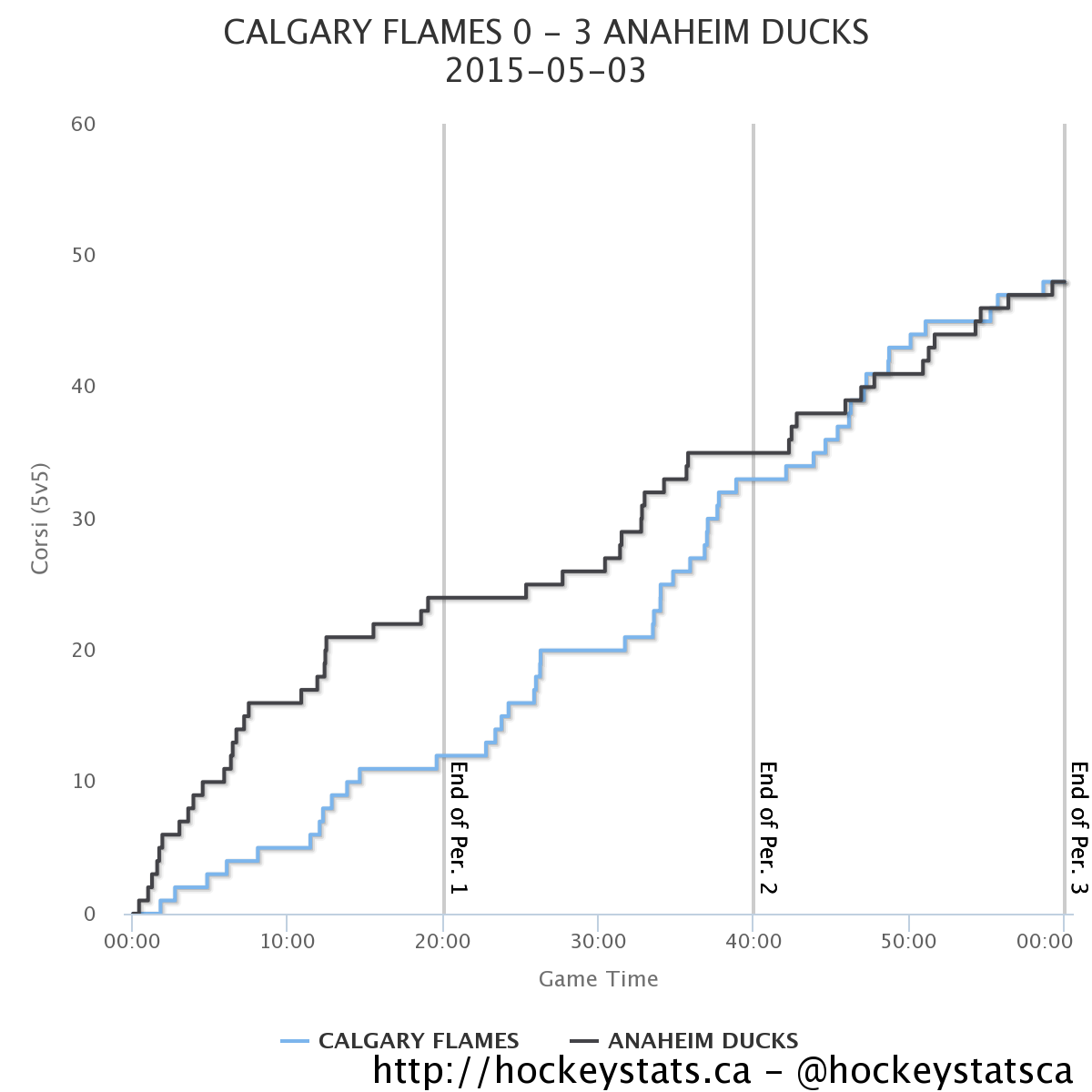 Speaking of chances, I wanted to add a chance chart from war-on-ice: 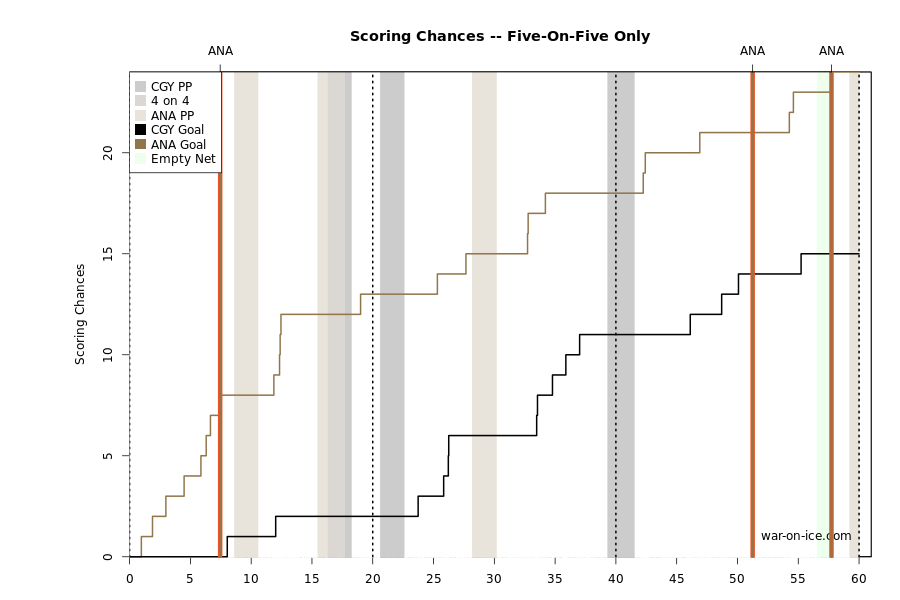 The end of the second period was when Freddie had to shine. Calgary put together a stretch of offensive play, but Anaheim did a much better job of keeping that outside the slot in the third. Furthermore, it was evident the Ducks didn't want to give up any odd man rushes or breakaways in the game, and a slightly less aggressive blue line resulted. Both Hampus Lindholm and Cam Fowler were noticeable moving forward, but it was in transition and not from pinching.

Here's the datarink charts I love: 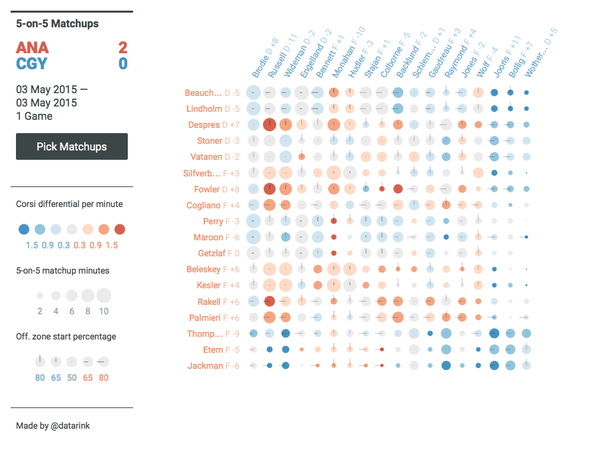 This chart reveals something that I'm sure was evident to everyone watching: the fourth line of Nate Thompson, Emerson Etem, and Tim Jackman was an absolute liability in shot attempt differential terms. (For those keeping score at home: two games of Thompson in the lineup have resulted in two games of surprisingly low team corsi for against a very weak Flames team. Hmm.)

Boudreau managed his bench well in game one. How did he dole out minutes in game two (even strength): 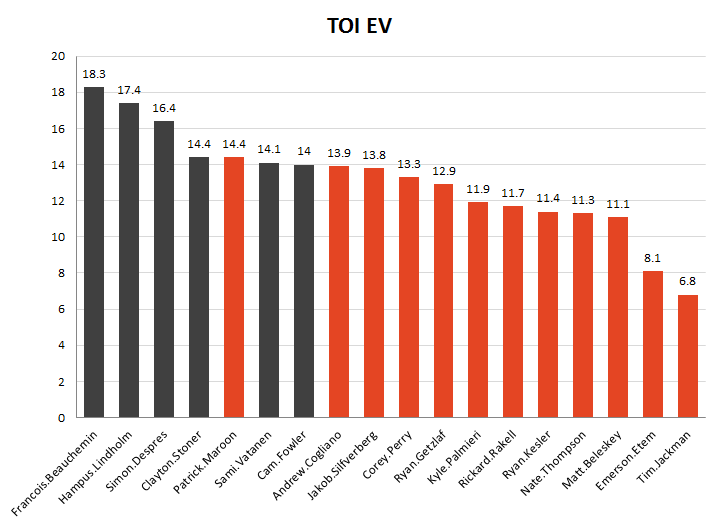 Clayton Stoner playing more even strength minutes than either Sami Vatanen and Fowler is an interesting strategy against a speedy team. Ryan Kesler and Rickard Rakell splitting their time with Thompson actually explains a lot of the second and third period in terms of shelling too. And frankly, Kesler playing fewer minutes than Rakell is ridiculous - and I'm an unabashed Ricky fan.

Did it work out in all situations? Let's see: 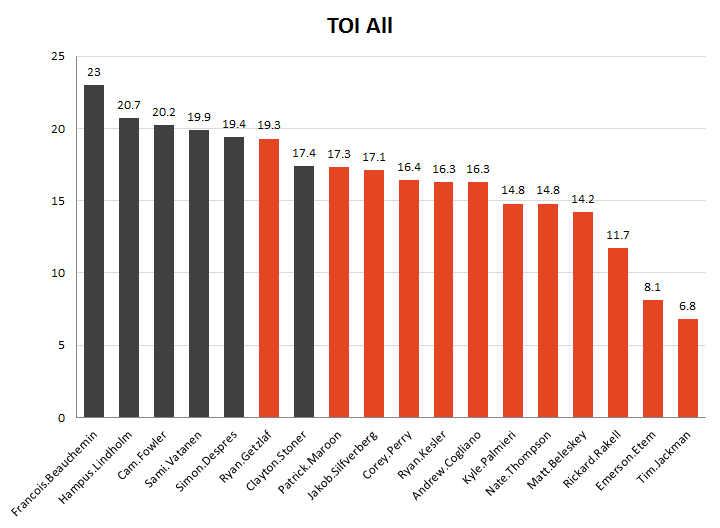 This tells me Stoner saw more at 5v5 because Fowler and Vatanen were used a lot more on the power play. Thompson played a lot of penalty kill minutes as well as about one minute of power play time to end the game - Boudreau sending a message to Hartley that he's not interested in embarrassing Calgary, which will hopefully prevent the latter from gooning it up every game.

My verdict? Boudreau fell back on some bad usage habits in game two, and the push from the Flames that resulted is predictable in that instance. Too much Thompson and Stoner at even strength nets the Ducks nothing going the other way. Since Anaheim had a lead, perhaps Boudreau could justify it, but it's still asking a lot of Andersen to make more saves when the team could have been pressuring Ramo even more - like say with Kesler and Rakell getting the proper distribution of minutes.

Let's hope his road game usage favors skill over his falsely perceived "good defensive players." The Flames have scored a lot of goals at home this postseason.