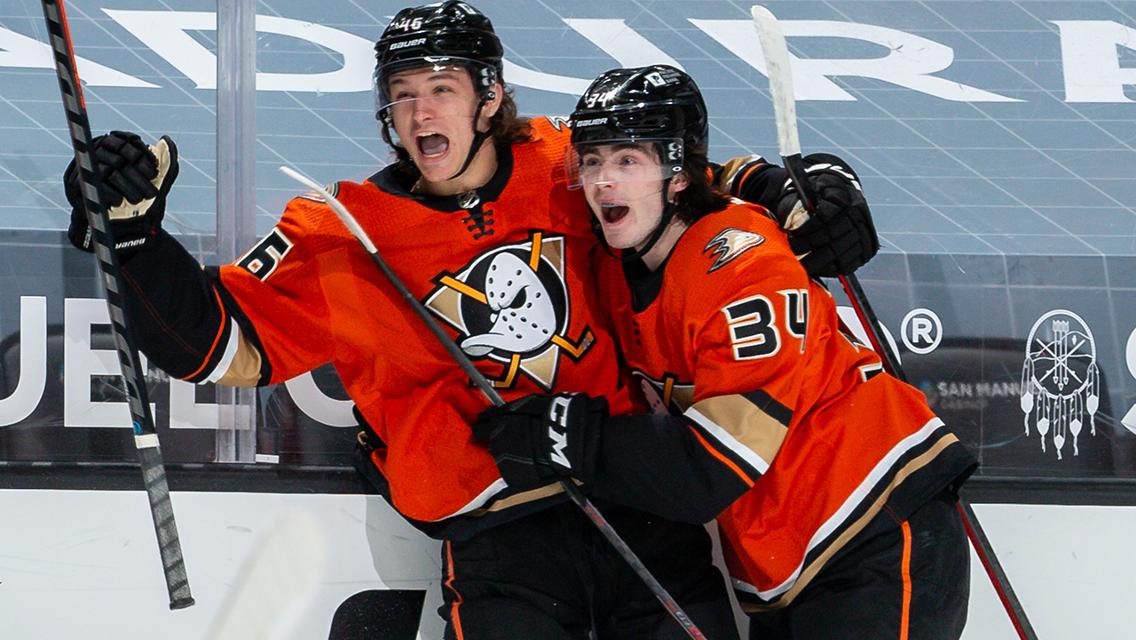 Hey all, I haven't been keeping up on Anaheim Calling the last year or so, but I came on to kind of get the hot takes of this offseason. Hope everyone is well!

Last season in the bubble, I barely got to watch any games (and frankly wasn't too interested in seeing any given the state of the team), however, this season I definitely caught a good chunk of the season... It's nice to see some things don't change! Horrible power play, haphazard zone breakouts, head-scratching defensive plays, and the non-existent goal scoring were all to familiar. That said, I feel a weird horribly misplaced optimism welling up in me watching some of our younger players. While I am still hesitant to think any will turn into great NHL players, I did see glimpses of play that had me feeling better about the team moving forward.

As most of us know, Zegras can play. Have no clue what his ceiling is, but it seems to bode well for the Ducks for sure. Of course, Comtois would seemingly benefit the most from this development as he has continued to slowly build himself into a solid winger at this level. I look for Comtois to be even better next year as he rounds further into the player he will be at his prime.

And I can't believe I am saying this but Troy Terry is starting to look like a player that can do something at this level. I have been very down on his game, but something about his back checking and positioning in the offensive zone started to make me feel like it was going in the right direction finally. He has so many tools that should translate, I just hope he keeps gaining confidence to use them more moving forward. His goal needs to be to put up 20 goals this next year. He is a good passer, but I think he under-utilizes his best asset which is quick wrister.

Isac Lundestrom is kind of an ex-factor for me. He is really more of a checker than a scorer, and while he isn't great at anything necessarily, he seems to be one of the better all around players on the team. If he can become more cemented in his role on the team either as a primary defensive centerman or a reliable 2nd line scorer I can see it being a huge boost to the team. He's the kind of guy who will get under-recognized, but will be a key role, kind of like Philip Danault for the Canadians right now. Lundestrom is a really good skater and nice hockey iq guy, the latter something the Ducks seem to sorely miss nowadays...

It pains me to think about some of our veterans moving on, but it seems like the writing may be on the wall already. Getzlaf is not the player he once was, but he can still be a valuable member of this team if they can keep him. I hope they can, but I think that would take Getz staying to rebuild and that wouldn't be fun for him I'd assume. Rakell and Silfverberg seem like they may not last long here given their lowered production the past 2 seasons. I think on good teams they are still valuable and we know the Ducks aren't good. Hopefully we don't have to see one of them in Seattle roasting us every couple of games like Shea Theodore and William Karlsson on Vegas... (So annoying to see that still)

While many will say Adam Henrique should be the odd man out, and it seems that management certainly thinks so, I feel of most of the veterans forwards under contract, he kind of makes the most sense to keep. He won't fetch the most value in a trade, and he is on a salary that is a bit bloated and long for what he is, but he will contribute on the scoresheet and seems to fit the style of play of our youngsters better for whatever reason. For that, I know he is doomed to be jettisoned by Murray because it makes sense on the rink... oh well.

While the goal scoring seems to be the most crucial need for the team, something tells me it's the ineffective defense that causes much of the problem in my mind. This team is horrible at exiting their own zone with the puck. It's been a problem for a number of years and some of it is a systems thing. But be that as it may, some players on the Ducks need to improve here immediately or you won't see any offense again from this team.

Now, our defense is a huge question mark as Manson and Lindholm and to a lesser extent Fowler have again shown the inability to stay healthy and really be top tier defenders who can influences games consistently enough to push their team into the win columns. Let's hope it's more about their missing games than their play, but something tells me not to count on that. It's a bit disappointing given especially how much it seemed like Manson and Lindholm had almost got there a couple years back.

Frankly, the Ducks will need one of Drysdale, Fleury, Benoit, or Mahura to really make an enormous step forward in order for the team to have any chance. I haven't seen enough of Drysdale to really evaluate whether he will make a real impact on an NHL team or not, in someways he would not be very noticeable in some games he played in other than when he was taken advantage of on the defensive zone. That is obviously not unusual for young defenseman, but for such a good passer and skater, I was hoping to see more moments that wowed me. That said, being kind of 'unseen and unheard' can be a good thing for a defenseman especially one touted for his offense. I did like the pairing of him and Fleury toward the end of the year though. I think the Ducks should be careful not to rush him. Let him dominate the AHL if necessary.

Speaking of Fleury, he seems to fit really well into this "core" the Ducks are developing. I saw some stuff that looked solid from him during his short stint here. It should continue as long as he grows into a more effective defender. If he can grow more in a role that sees him impact opponents goal scoring/shot generation, it will be because he learns to read plays better and that's the hardest thing for defenseman to "learn." He has a nice active stick, decent skating and size to do it, but it's a matter if it all comes together with measurable results in the end. I am not so sure that can be expected, but I will say I am happy he was in and Hakanpaa was out.

Mahura is probably the ex-factor on the backend. He is sneaky good at getting his shot through to the net in a way that most Duck defenders can only dream. Now I don't always like what I seem from him besides that. In today's NHL, your ability to skate and pass seem to be best indicator on your teams success as a defenseman. Josh has both of those abilities and may fit in a sheltered third pairing spot if the team can stay healthy and keep the Kraken from grabbing too much from the Ducks.

Speaking which, the player I think might move for the Ducks is Josh Manson. While he is a right shot and undisputably the most physical player on the Ducks backend, his trajectory has been trending downward for a couple of years. However, he may still hold a decent stock with other scouting departments around the league. As such, I see him as a commodity that the Ducks should shop. I'd put Fowler in that category as well, however, the Ducks won't move Capitan America since he is the de facto leader on the backend as well as being a fan and management favorite under a pretty sizable contract.

We all know John Gibson's potential to be a top goaltender in the league. Well he would need an actual defense to help him realize that potential haha. This team hasn't been able to protect him from high danger chances for a number of years and it doesn't seem like they will next year either. I have long wonder like many here if keeping Gibson is the right move, but it is usually a bad move to trade a goalie. It rarely seems to work for the teams moving them. So it seems like he is stuck here and we are stuck with him. It is apparent he has some injury issues, so it is imperative the team has a solid number 2. That remains to be seen now that Ryan Miller has left. Gibson will need to become even more impressive in order for this team to make any noise next season. He will need to be a leader by example next season again for this team to do anything other than wait for another draft lottery lose.

I haven't been keeping up with the news here as much as I would have liked, but its awesome to still see some familiar faces contributing. Additionally, I have tuned into the podcast from time to time last year while commuting around and enjoyed how thorough it is. Hopefully, my ranting was enjoyable haha. It's been a while since I tried to write something like this and I am too lazy to edit it down. Looking forward to seeing if anyone makes it this far with this! haha.

Also, who should the Ducks draft with #3? My thoughts, Jack Eichel haha. Ok comment below Quack,,,